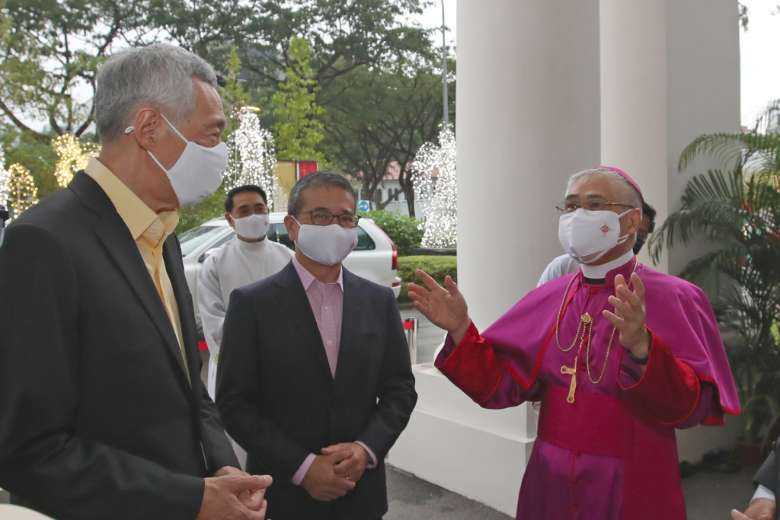 Singapore's Prime Minister Lee Hsien Loong (left) is seen with Archbishop William Goh at the Cathedral of the Good Shepherd in December 2021 to mark the bicentennial of the local church. (Photo: Betty Chua/MCI, Singapore)

“Congratulations to Archbishop William Goh who will be created a cardinal by Pope Francis in August. He will be the first Singaporean cardinal, a rank second only to the pope in the church hierarchy. This is especially significant to our Catholic community, who marked their bicentennial [anniversary] just last year,” PM Lee wrote on his official Facebook page on June 1.

Lee also posted a photo with Cardinal-elect Goh taken during the final phase of the 200th anniversary of Catholicism in Singapore last December.

The greetings came after Pope Francis named Archbishop Goh as one of 21 new cardinals, including six from Asia, on May 29.

The premier hailed the 64-year-old archbishop for guiding Catholics in the city-state, actively working with fellow religious leaders in promoting religious harmony and supporting the progress of the country since taking office in 2013.

“I am confident that he will continue to bring his wisdom and humility to his new responsibilities. I wish him every success in his new appointment and look forward to him making a greater contribution to the church and to the broader community, in Singapore and beyond,” Lee added.

“I would be happy just to finish the task of building our archdiocese, a vibrant, evangelizing and missionary church; and then retire to a simple, quiet and contemplative life"

Following the nomination, Singapore Archdiocese issued a statement saying that Archbishop Goh is “deeply humbled” by this honor.

The prelate posted on Facebook on June 1 to share his personal feelings and seek prayers for his universal mission.

Archbishop Goh said he was already so overwhelmed by his responsibilities as bishop for the local church that he had never thought of any other appointments.

“I would be happy just to finish the task of building our archdiocese, a vibrant, evangelizing and missionary church; and then retire to a simple, quiet and contemplative life. But God works in mysterious ways. Man proposes, He disposes. He bestows on me what I never asked or desired,” he said.

Archbishop Goh said he considers himself “just an ordinary man” and does not know why He (God) had chosen him.

“But I feel that this honor is an endorsement of the archdiocese's vision of building a church that is vibrant, evangelizing and missionary. And so, I feel that my appointment to the College of Cardinals is not just an affirmation by the Holy Father but by God — that we are walking on the right track.”

The prelate said he found “great consolation and teared” when he thought how kind and gracious God has been to him and all those who rallied behind him all these years in “realizing our dream for the local church.”

“Please pray that I might have the strength, the humility, the wisdom, the holiness and fortitude to give up my life completely for the service of our Holy Father and the universal church"

Since he has been chosen to be a cardinal, he feels it is not enough to drive the local church to greater heights, but he must together with other cardinals look after the universal church by assisting and advising the Holy Father.

“A greater responsibility is now placed on me beyond the narrow confines of the archdiocese,” Archbishop Goh said.

“Please pray that I might have the strength, the humility, the wisdom, the holiness and fortitude to give up my life completely for the service of our Holy Father and the universal church, as well as continue to look after the interests of the local church in Singapore and the dioceses of Malaysia and Brunei.”

Archbishop Goh has been leading the Catholic community of some 300,000 in the city-state of an estimated 5.6 million people.

Singapore is a multi-ethnic and multi-religious society. Buddhists account for 31.1 percent, Christians 18.9 percent, Muslims 15.6 percent, Taoists 8.8 percent and Hindus 5 percent, according to official statistics from 2020. About 20 percent are non-religious.

Catholics in Singapore are mostly Chinese and Indian migrants and their descendants spread across 32 parishes.