Church of the Risen Christ is a melting pot of migrant communities from the Philippines, India, Indonesia and Myanmar 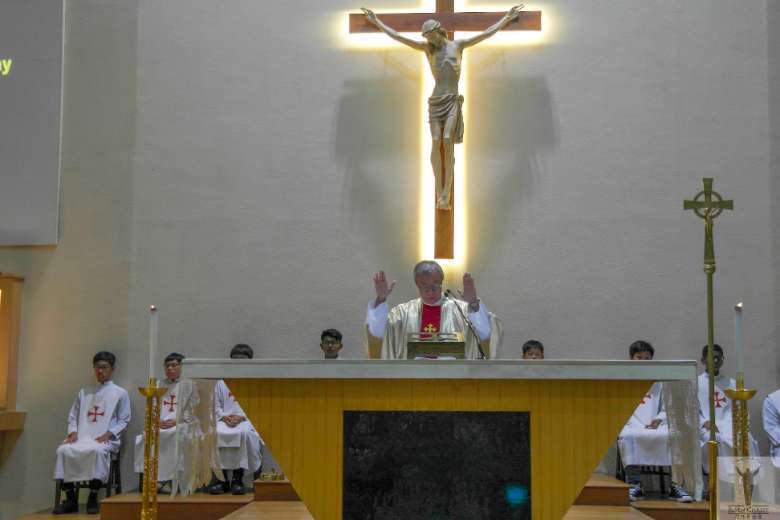 Ahead of Lent in March this year, Father Edward Lim, parish priest of the Church of the Risen Christ in Singapore, requested his parishioners to put aside an amount daily to help the needy.

By the end of the Lenten season, the campaign had raised S$35,000 (US$26,000). The money was then donated to Ahuva Good Shepherd, a children’s home for vocational education and residential care for teenage girls and single women in pregnancy crisis run by Good Shepherd nuns.

The nuns are based within the parish territory in Toa Payoh, a satellite town, and run Marymount Center, which accommodates several auspices for children and women, as reported by Catholic News, the publication of Singapore Archdiocese.

This campaign was one of a series of activities to mark 50 years of a parish that is the legacy of French missionaries from the Paris Foreign Missions Society (MEP).

The parish planned to celebrate the jubilee with a triduum celebration on July 3, but it was suspended due to Covid-19.

From February to June, the parish arranged for online rosary prayers led by the charismatic ministry of the church. Special reflections and talks were also organized and parishioners were encouraged to reflect on the past and present as well as success and failure.

The prelate paid tribute to MEP missionary Father Pierre Abrial, who played a vital role in establishing the parish

The parish also published a 148-page jubilee souvenir magazine. In his foreword for the magazine, Archbishop William Goh of Singapore congratulated the clergy, religious and laypeople and said the jubilee theme “Reflect. Rejoice. Renew” provides rich food for thought.

“Indeed, this is an opportune time to Reflect on how far you have come from your humble beginning, to Rejoice in your achievements as we thank God for the 50 years of graces poured out on your community, and to Renew your faith in the Risen Lord from whom you will draw your strength and creative energies to see you through to the next lap,” Archbishop Goh said in his message.

The prelate paid tribute to MEP missionary Father Pierre Abrial, who played a vital role in establishing the parish as Toa Payoh was being developed into a satellite town amid a massive industrialization drive in Singapore in the 1970s.

According to the parish’s historical records, there was a growing Catholic community in Toa Payoh in the 1960s that used the Ho Ping Center for religious activities, which were later shifted to the social function hall at the HDB East Area Office. Father Abrial celebrated the first Mass for the community at the hall on April 6, 1969.

In June 1969, Singapore's government invited religious bodies to submit tenders for 3,700 square meters of land. A month later, the authorities announced that a Catholic church would be built at the junction of Toa Payoh Central and Lorong 4.

While the announcement sparked joy among Catholics, it posed a massive challenge as the planned church construction required S$450,000 (US$333,000) for a church building.

A French missionary and the first archbishop of Singapore, Monsignor Michel Olçomendy, assigned Father Abrial and Father Adrian Anthony to raise funds and to oversee construction the church.

While benefactors and parishioners made contributions, Father Abrial made personal visits to encourage the faithful to donate money in the course of about 18 months.

In an interview, Father Anthony, the first assistant parish priest, spoke about how frugal Father Abrial was in raising funds to build the church.

“He would scrimp and save by having bread and coffee for dinner. Sometimes, the two of them would share a packet of noodles for a meal,” Father Anthony told the jubilee central committee, according to Catholic News.

The church is ethnically and culturally diverse as it has native Singaporeans living side by side with migrant communities from the Philippines, India, Indonesia and Myanmar

Finally, on July 3, 1971, the Church of the Risen Christ was inaugurated and blessed by Archbishop Olçomendy.

Over the years, Toa Payoh continued to expand as a major satellite town and the church with its parish community has also grown and thrived.

The church is ethnically and culturally diverse as it has native Singaporeans living side by side with migrant communities from the Philippines, India, Indonesia and Myanmar.

A special pastoral ministry is dedicated for migrant communities — Indonesians, Filipinos, Indians and the Mandarin-speaking community.

Over the years, the parish has produced 21 clergy and religious including diocesan priests John Lau, Peter Tan, Brian D’Souza and Edward Seah.

Linda Leong, a member of the faith renewal, exploration and evangelization ministry of the parish, said the jubilee is an occasion to be proud of the heritage of faith.

“All the activities leading to the anniversary were meaningful to me and the stories we heard of the hardship and sacrifice put into building the church in its early days give us reason to be truly proud of our heritage,” Leong said.

Singapore, with a population of about 5.6 million, is a multi-ethnic and multi-religious country. Most Chinese are Buddhists and most Malays are Muslims. Christians comprise about 15 percent of the population, according to official government records.

The local Catholic Church, which celebrates its 200th anniversary this year, is a legacy St. Laurent Marie Joseph Imbert (1796-1839), a French MEP priest who landed in Singapore from France on Dec. 11, 1821, for missionary assignments to Penang (Malaysia) and China. The date of arrival of Father Imbert in Singapore is historically viewed as the beginning of the local Church.