Sister Gerard Fernandez, who led a prison ministry, has been listed as an inspiring leader by the BBC 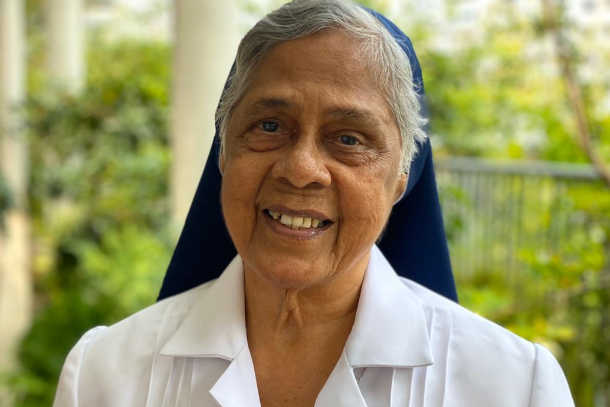 Good Shepherd Sister Gerard Fernandez, 81, has been named by the British Broadcasting Corporation (BBC) as one of the globally inspiring personalities this year. The nun led the Catholic Church's prison ministry in Singapore. (Photo supplied)

An 81-year-old Catholic nun, who served as a prison counselor in Singapore for four decades, has been named on this year's BBC list of 100 influential and inspiring global women.

Good Shepherd Sister Gerard Fernandez, who led the Catholic Church's prison ministry in the island nation, has been named by the British Broadcasting Corporation (BBC) as one of the globally inspiring personalities.

"The Lord has many surprises. This was one of them," said the nun after hearing of her nomination. At the age of 81, she did not expect any recognition, she said.

"I have not done anything for fame or glory or awards. But I'm happy that a Good Shepherd is selected. Our work is to be with the abandoned," she told ucanews.

Sister Fernandez started visiting prisoners as a young nun. In 1997, when the Singapore Archdiocese began its prison ministry, she was chosen to lead it. The job continued until she relinquished it in 2017.

In her service to prisoners of more than 40 years, she counseled hundreds and "walked with" at least 18 inmates on death row until their execution, the BBC said.

Death row inmates she counseled included two women. Catherine Tan Mui Choo and Hoe Kah Hong, who helped Adrian Lim to murder two children as a sacrifice to the Hindu goddess Kali. Lim claimed to be a medium. All three were hanged in 1988.

The BBC list includes women from more than 50 countries aged from 15 to 98 and selected based on this year's theme: "The Female Future."

"A female future, like any other, would be one filled with kindness, dignity and equality, a world without discrimination or hate, one that's driven by compassion," the BBC quoted Sister Fernandez as saying.

"You should ask the BBC," Sister Fernandez said when asked why she was selected. The nun said BBC journalist Heather Chen, who had interviewed her earlier, put forward her name for this year's list.

The list has six categories of earth, knowledge, leadership, creativity, sports and identity. Sister Fernandes was named in the leadership category.

A group of BBC journalists who covered the rape case decided to create a series to help examine the role of women in the 21st century, focusing on the issues and achievements of women.