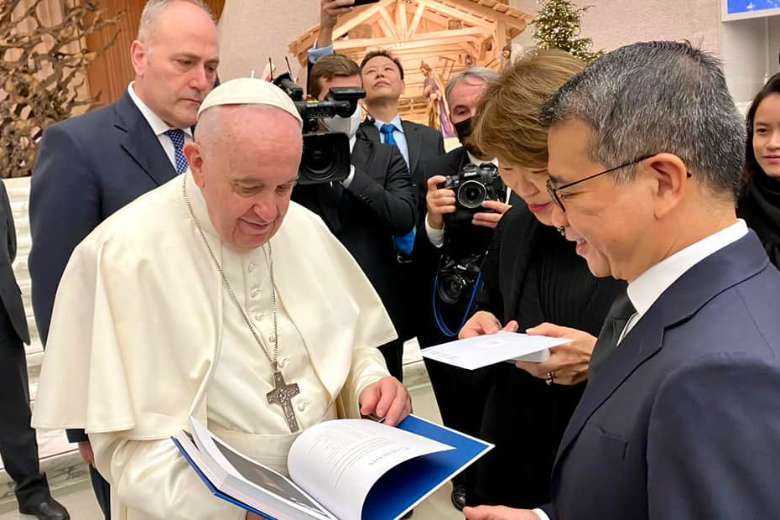 Singapore minister Edwin Tong hands Pope Francis a commemorative book on the 200-year jubilee of the Catholic Church in Singapore during an audience at the Vatican on Jan. 5. (Photo: Facebook page of Edwin Tong)

Singapore’s Minister of Culture, Community and Youth Edwin Tong met with Pope Francis in the Vatican during an official visit aimed at reaffirming bilateral ties.

Tong, 52, a Catholic and a member of the ruling People’s Action Party, had a brief audience with the pope on Jan. 5 along with a Singapore delegation that included non-resident ambassador Janet Ang.

During the audience, Tong handed over a commemorative book to Pope Francis on behalf of Archbishop William Goh of Singapore. The book is a souvenir published as a part of recently held celebrations for 200 years of the Catholic Church in Singapore, reported The Straits Times.

They also briefly chatted about issues of mutual interest including social cohesion, multi-religiosity and harmony.

Following the visit, Tong posted photos and highly appreciated the encounter with the supreme pontiff of the Catholic Church on his official Facebook page.

“Pope Francis was warm, humble, and personable. He had a kind word or gesture for everyone and made it a point to warmly welcome everyone in the Singapore delegation,” Tong said.

His unwavering outreach and a strong heart for the last, the lost and the least in each community are valuable learning points for our own society

Fratelli Tutti, he said, aims to promote a universal aspiration toward fraternity and social friendship, concluding that the time has come to “dream, then, as a single human family.”

“These teachings resonate strongly with a multicultural and religiously diverse Singapore,” he added.

“His unwavering outreach and a strong heart for the last, the lost and the least in each community are valuable learning points for our own society.

“These teachings transcend the Catholic faith, and indeed, anyone single faith alone; they have a true universal, timeless relevance.”

Tong said Singapore will continue to work to foster closer ties with the Holy See.

Singapore was a Malay fishing village before Sir Stamford Raffles made it a British colony in 1819.

Today, Singapore is a sovereign city-state with a multi-ethnic and multi-religious nation. Its estimated population is 5.6 million. According to the Department of Statistics of Singapore, about 31.1 percent of Singaporeans are Buddhist, 18.9 percent are Christian, 15.6 percent Muslim, 8.8 percent Taoist and 5 percent Hindu. About 20 percent don’t adhere any religion.

Catholicism arrived on the shores of Singapore on Dec. 11, 1821, with the arrival of St. Laurent Marie Joseph Imbert (1796-1839), a French priest of the Paris Foreign Missions Society (MEP). The date of Father Laurent’s arrival in Singapore is historically known as the beginning of the Catholic Church in Singapore.

The Archdiocese of Singapore, which covers the entire island, has about 360,000 Catholics.

Singapore and the Vatican have maintained diplomatic relations since 1981.