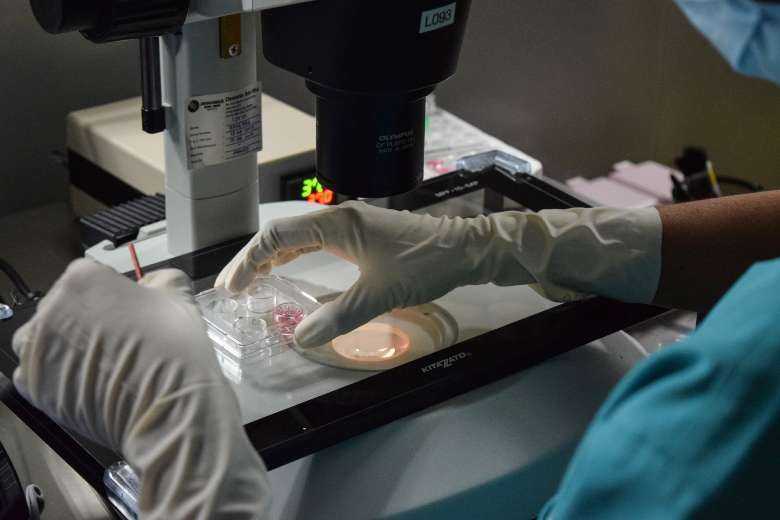 This picture taken on May 11, 2021 shows a staff member showing a mock-up of work being done on women's eggs in the laboratory at the KL Fertility Centre in Kuala Lumpur. (Photo: SAM REEVES / AFP)

With a busy job that left little time to think about starting a family, Erica decided to sidestep Singapore's ban on egg freezing for a chance to have children later in life.

The advertising executive is among a growing number of women travelling overseas to get their eggs frozen, as people in the work-obsessed city-state increasingly delay having children.

Now calls are growing for authorities to loosen the rules in a bid to help boost one of the world's lowest birth rates.

"It's quite unfair to women here," Erica, who used a pseudonym, said of the current policy on egg freezing.

"It doesn't give women in Singapore the chance to have an opportunity to give birth in their 40s, and therefore they feel like they would have to settle in their 30s because time is not on their side," the 40-year-old added.

Singapore's fertility rate reached a historic low of 1.1 babies per woman last year, compared to a global average of 2.4.

This is despite decades of official encouragement to boost births, ranging from cash bonuses for having a baby to subsidised fertility treatments for married couples.

But while advocates say egg freezing could help lift birth rates, authorities still only allow it for certain medical conditions, such as if a woman is undergoing cancer treatment.

Many other countries permit the procedure, even without medical reasons.

But in socially conservative Singapore, the government and religious groups have expressed concern that egg freezing may encourage women to delay getting married and having children.

The procedure involves collecting eggs from a woman's ovaries, freezing them unfertilised and storing them for later use.

When a woman wants to try to get pregnant, the egg is thawed and combined with sperm before being transferred to the uterus.

Women's fertility typically begins declining from the mid-30s but freezing eggs can give them a chance to have children later.

Erica, who is not originally from Singapore but holds permanent resident status, decided to have the procedure at the age of 36 after breaking up with her boyfriend of six years.

She flew to Kuala Lumpur in Malaysia about five times for consultations, to refill hormone jabs, then finally for the egg extraction at the KL Fertility Centre.

The clinic has seen a growing number of Singaporeans coming for the procedure and, before the coronavirus closed borders, was freezing eggs of three to six women a year from the city-state.

"There is actually a huge demand because of changing social dynamics," said Helena Lim, a doctor at the centre.

"Women have more opportunity to get higher education, lifestyles are different."

This isn't just an issue in Singapore. In many developed countries, women are delaying childbearing for several reasons, including financial considerations and career pressure.

There are no official figures on how many in Singapore have gone overseas to freeze their eggs, but anecdotal evidence suggests numbers have been rising.

Sunfert International, which has several fertility clinics across Malaysia, told AFP that enquiries and patients from Singapore were increasing by about 15 percent each year before the pandemic.

Singaporeans are also heading to countries like Thailand and Australia for the procedure.

Pressure has been growing on Singapore to lift its ban for some time, but there is little sign an overhaul is imminent.

The Ministry of Social and Family Development said last year there were "ethical and social concerns" over such a move, which could cause more women "to delay marriage or parenthood".

The National Council of Churches of Singapore has also spoken out against elective egg freezing, calling it a "profoundly selfish act" and saying that women should instead be encouraged to have children earlier in life.

Erica is now in a relationship and hopes to have children soon -- the couple will try to conceive naturally first and have the frozen eggs as a backup.

"Having this as an option just gives women more opportunity to really settle with the person that you want to be happy with," she said of freezing her eggs.

"I feel that it's a great decision."