Authorities say Abdul Somad Batubara, who once called the cross a 'symbol of the devil' is a security risk 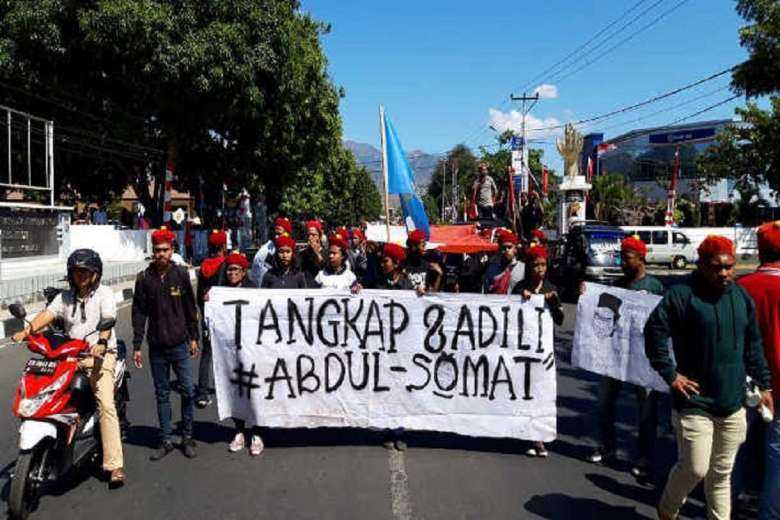 In this file photo, protestors carry a banner reading “Tangkap dan Adili Abdul Somad” (arrest and bring Abdul Somad to justice) during a protest against the Muslim cleric in Maumere, East Nusa Tenggara province, in August 2019. (Photo courtesy of the Maumere chapter of the Indonesian Catholic Students Association)

An Indonesian Muslim cleric has been denied entry into Singapore because of “extremist and segregationist teachings” that target other religions, including Christians.

Abdul Somad Batubara, who boasts a large online following in Indonesia, was stopped and refused entry at Singapore’s Tanah Merah Ferry Terminal on May 16 after arriving from Batam in Indonesia’s Riau Islands with his family.

He and his group were sent back to Batam the same day.

In a short video posted on his YouTube channel on May 17, he said his visit was for a holiday, not for religious purposes.

“They gave me no explanation for refusing me entry before we were sent back on the last ferry that day,” he said, adding that he was once denied entry into Timor Leste in 2018 over a terrorism allegation.

Singapore’s Ministry of Home Affairs later said Somad was turned away as he was considered a security risk.

“Somad has been known to preach extremist and segregationist rhetoric, which are unacceptable in Singapore’s multi-racial and multi-religious society,” the ministry said in a statement posted on its website on May 17.

The ministry said he has denigrated members of other faiths, and pointed to him once describing the Christian crucifix as the dwelling place of demons and publicly referred to non-Muslims as infidels.

In 2019, Somad came under fire over a video uploaded on social media in which he referred to Christ as an “infidel on a cross” and called the cross a “symbol of the devil.”

He was answering a question from a woman who had asked why she shivered when she saw a cross.

His answer sparked anger among Christians across Indonesia that saw Catholic university students in East Nusa Tenggara province stage a protest to demand his arrest.

“All religious teachings are good. Both Muslim and non-Muslim preachers must be very careful about the words they use. Their words must help strengthen religious tolerance not weaken it,” he told UCA News.