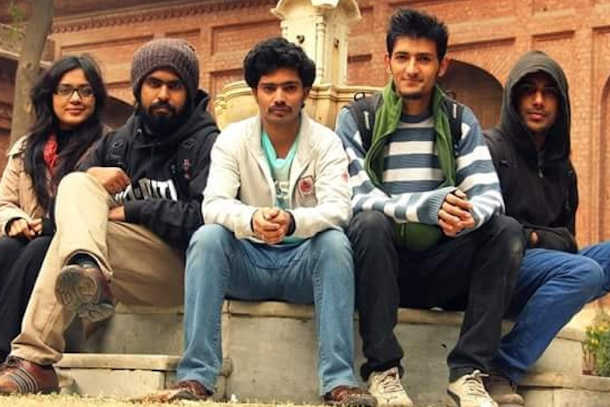 Qutub Rind is flanked by his classmates at the National College of Arts in Lahore in Pakistan's Punjab province in this undated file photo before his untimely death. (Photo by Taj Rind)

The family of an artist from the Pakistani province of Sindh, who died recently in Lahore claim, said he was killed in response to false allegations of blasphemy and say local police were complicit in covering up the crime to remove its religious underpinnings.

Qutub Rind, 34, died on July 17 after falling from the third floor of a house he rented in the capital of Punjab province.

Police sources said the tragedy resulted from a dispute over rent but his family suspect foul play as people had earlier accused Rind of proclaiming himself a prophet.

Police later arrested the owner of the house where he was staying as well as the owner's brother. They have been charged with murder.

"The owner and two other men tortured him with iron rods in front of Qutub's 7-year-old son and young nephew," Gul Baig Rind, the victim's uncle, told ucanews.com.

"The children witnessed them shouting and calling him a kafir [infidel] and a Jew. Qutub maintained his innocence and even recited the kalma [the Islamic proclamation of faith]," he said.

"Still they fractured his arms and one of his legs before throwing him from the balcony."

"The report was not based on our application. The police mentioned nothing of a third culprit [in the killing] and convinced the owner and his brother to change their original statement accusing Rind of blasphemy," he said. He said the family's complaints to the police had fallen on deaf ears.

Qutub, a fine arts graduate who hailed from Jacobabad in southern Sindh province, was visiting Lahore to arrange an exhibition.

"First they said he was proclaiming himself to be the Prophet Abraham. Now they [the arrested house owner and his brother] are accusing him of being a drug addict and a psychopath who fell to his death," Gul Baig Rind said.

"But there has been no official autopsy or court hearing as of now. And Qutub's elderly father, who is a farmer, is demanding justice for his martyred son."

He recalls the artist as a benevolent person who would often go out of his way to help aspiring young artists from his home province gain admission to the prestigious National College of Arts in Lahore.

Now several rights organizations are sending fact-finding teams to the scene of the alleged crime to investigate further after a local journalist broke the story of the potential cover-up.

The Human Rights Commission of Pakistan reported a spike in blasphemy-related violence last year with 189 cases on file, including 135 in Punjab alone.

According to its most recent annual report, it said at least 65 people have been murdered in Pakistan over unproven allegations of blasphemy since 1995.

In another recent incident, the Pakistani Bishops' National Commission for Justice and Peace has strongly condemned the lynching of a journalism student in the city of Mardan in Khyber Pakhtunkhwa province.

Masha Khan, who was studying at Abdul Wali Khan University, had been accused of posting blasphemous content online.

A group called Rawadari Tehreek (Movement for Tolerance) said this was the latest in a string of tragedies where religious zealots have targeted innocent civilians.

"Politicians have promised justice will be served in Qutub's case," said the group's chairman Samson Salamat.

"Accusing someone of blasphemy is being used as a get-out-of-jail-free card by murderers and maniacs. False accusations like this have haunted religious minorities in our country for decades. Now it is starting to infect the whole of society.

"More than half of all blasphemy cases here are based on land disputes. Despite their reported misuse to settle personal scores or attack a particular sect, religious groups continue to thrive on exploiting this sensitive issue. They oppose any amendment in the blasphemy law."