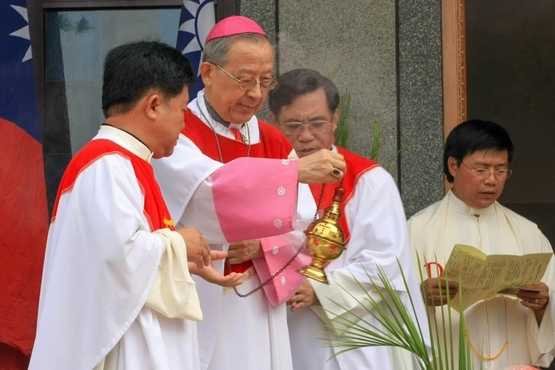 A simple funeral was held for Emeritus Bishop Joseph Wang Yu-jung of Taichung in accordance with his wishes.

Bishop Martin Su Yao-wen of Taichung told ucanews.com that Bishop Wang had written a will requesting that his funeral should be "simple and quick" like that of the late Archbishop Stanislaus Lo-Kuang of Taipei.

"In fact, the funeral of the late Pope John Paul II was also like that, with only a coffin, a Bible and a candle of resurrection," Bishop Su said.

"Bishop Wang spent his whole life to bring people to know God. He wished his funeral would lead people to know that God is who it points to and focus only on Jesus," Bishop Su said.

A funeral Mass and a final commendation were presided over by Bishop Su on Jan. 24. Bishop Wang's body was buried in the Catholic graveyard inside Dadu Hill Public Cemetery.

Bishop Su described Bishop Wang as a traditional Chinese father — "not easy to get close to but he cared about you in every detail of your life."

When Bishop Wang knew that Bishop Su was going to a retreat, he showed his support "like a father but with very few words."

Bishop Wang, who had studied canon law, led a team of priests to translate the Latin "Code of Canon Law" into Chinese when he was secretary-general of the bishops' conference.

Most Holy See documents and papal encyclicals and exhortations were translated by Bishop Wang into Chinese for the Chinese Church, and he continued to help after he retired.

Bishop Wang was born in 1931 in Shanghai. He graduated from St. Ignace College in Xujiahui in 1948 and later entered a seminary in Xujiahui.

From 1949-56, he studied philosophy and theology in Spain and was ordained as a priest by Cardinal Paul Yu Pin in Madrid.

He was assigned to study canon law in Rome in 1956 and obtained a doctorate in canon law at the Pontifical Urban University in 1959. He served as the chancellor of Kaohsiung Diocese from 1961-66 after returning to Taiwan.

In Taiwan, he subsequently served as a judge, chancellor and vicar general of the archbishop's office. He also taught foreign languages at Tamkang University and other education institutes.

He was appointed auxiliary bishop of Taipei Archdiocese on July 1, 1975, and 21 days later was ordained a bishop at Sun Yat-sen Memorial Hall in Taipei.