Cambodian police block a street in Phnom Penh on Nov. 16, 2017 for a Supreme Court hearing on the dissolution of the main opposition party. (Photo Tang Chhin Sothy/AFP)

The dissolution of Cambodia's main opposition party has had a chilling effect on the critics of Prime Minister Hun Sen and deterred many of them from speaking out, civil society leaders say.

The opposition Cambodia National Rescue Party (CNRP) was dissolved by the country's Supreme Court Nov. 16 over accusations it was attempting to overthrow the government through a "color revolution" backed by the United States. The dissolution has been widely seen as the death knell of democracy, as Hun Sen and his Cambodian People's Party fear losing next year's general election.

The ban comes against a backdrop of arrests, intimidation and muzzling of critics.

Opposition leader Kem Sokha was recently charged with treason over a video saying he received training from the United States, independent media outlets have been shuttered and civil society groups targeted.

The Cambodian Center for Human Rights (CCHR) was accused by a lawyer during the CNRP hearing of being a facilitator of a plot to carry out a "color revolution."

The center's director Chak Sopheap said she was "naturally concerned" her group was mentioned in the Supreme Court despite maintaining a non-partisan stance.

"The level of surveillance and intimidation tactics employed against civil society and independent media by the authorities in recent days has reached deeply troubling levels," Sopheap told ucanews.com.

"The authorities should cease their campaign of repression and restore the situation if they are to maintain a shred of legitimacy beyond 2017," she said.

Interior Ministry spokesman Khieu Sopheak told the Phnom Penh Post Nov. 20 that the CCHR was one of the groups and individuals being "monitored" to judge whether they had given up on their alleged plans to wage a revolution. 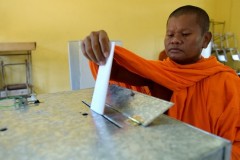 On Sunday, Hun Sen called for the closure of the rights group, which was founded by Kem Sokha in 2002, accusing it of taking direction from “foreigners” and appearing to link it to the alleged "revolution," the Post reported.

Another prominent figure accused inside the court of helping foment rebellion was Pa Nguon Teang, executive director at the Cambodian Center for Independent Media.

Two days later, two former reporters for Radio Free Asia, which was shuttered in September amid government pressure, were charged with espionage for allegedly setting up a studio for RFA. They both deny the charges which could land them up to 15 years in jail.

Political blogger Noan Sereiboth said the current climate was having a "chilling effect" on independent voices and leading to self-censorship.

"The strong crackdown from the government and arbitrary law enforcement makes people fearful to speak and express their opinions on what the government has done and implemented. They are afraid of making mistakes when talking politics," Sereiboth said.

"It is not safe for them to say bad things about the government at the moment. The space (for opinion) is not like before."

The sentiment was echoed by Hang Vitou, director of the Young Analysts Group, which was set up by prominent government critic Kem Ley, who was murdered last year in what was widely seen a politically-motivated assassination.

"I see plenty of people who used to talk about politics in Cambodia in the market or anywhere, now they do not talk much about politics because someone looks at you and maybe they will try to investigate what you are saying," Vitou said.

"My friends say 'please don't share posts, advice or comments about politics because we can be judged or we can be tried or you can be arrested'. Many people are afraid, I've accepted that now."

Despite the current hostile climate, Vitou said his group would continue to voice their views.

"I still do my thing, you know. I'll still continue my work because it's not the first time, it's happened so many times in Cambodia," he said.

"I will do it more if the government try to crack down or try to investigate the people who give their opinions on Facebook," he added. "We think it's better for Cambodia."