Signs of hard times ahead in Malaysia 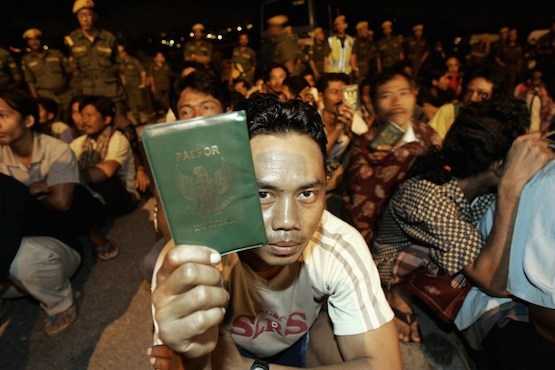 A migrant worker shows his Indonesian passport during an immigration raid in Kuala Lumpur, Malaysia in this file photo. (Photo by AFP)

Ardi (not his real name) draws up on his recently-bought second-hand motorcycle and parks it under a tree by the roadside.

The 46-year-old Indonesian migrant worker found steady work six months ago and it's given him newfound confidence. The days of riding around on a bicycle doing odd jobs are all but over.

His new job is mowing the grassy verges of roads, tens of kilometers long. He's been doing that the last several months. The work pays about 5,000 ringgit (US $1,100) per job. He and three friends share this.

It's far more than he would earn back home in Sulawesi, Indonesia.

But Ardi is uneasy. Recently, two policemen on motorcycles drew up at the rented kampong shack he and his friends shared and demanded to see their papers. After scrutinizing them they demanded 400 ringgit (US$100).

Such shakedowns had stopped about two years ago. Times were tough then for migrant workers like him and he has since made good. Now he's concerned he may have to give up his newly acquired motorbike.

Jobs are scarce; unemployment has grown and this has serious consequences for the security of migrant workers and refugees, human rights workers warn.

Malaysian companies and industries, including the money-spinning oil and gas industry, looking for ways to cut their losses, are retrenching workers.

Tenaganita, a nonprofit organization that works to prevent the exploitation of migrant workers as well as halt human trafficking, believes the knock-on effects of fiscal problems the government is facing will be especially hard on vulnerable people like Ardi.

Destination countries often respond to the economic crisis by taking steps to decrease the inflow of migrants.

"Already we can see the visa fees increase from [$3 to $55] for all migrant workers," Tenaganita executive director Glorene Das says.

Her organization also recorded several cases of unfair job terminations in the past few months.

"When the demand for labor slackens it is expected that those in the weakest bargaining position, usually temporary migrant workers and in particular the undocumented, will accept almost any condition just to retain their jobs," Das warns.

She fears that "slave-like conditions" will prevail with little protection for workers. Between 2011 and last year, flow of migrant workers from Indonesia has dropped from 586,802 to 275,736, according to the Indonesian government.

In June last year Malaysia announced plans to bring in some 1.5 million workers from Bangladesh over a three-year period. However, there has been little talk about this in recent months.

The number of Bangladeshi workers entering Malaysia is estimated to be between 200-300 a week, according to Tenaganita.

Still Malaysia continues to be the top destination for refugees and migrants in the Asean region, despite grim records of exploitation; there is little protection for them.

The UNHCR says that by last September, the agency had registered some some 153,850 refugees and asylum-seekers. Just over half are males and 33,740 are aged below 18.

"Yes there were some arrests after the outburst of the events [last June when mass graves and camps where discovered on the Thai-Malaysian border where traffickers had kept fleeing migrants in slave-like conditions]," says Das.

"Prosecution was limited to only three cases," she says, lamenting that authorities are not doing enough to protect migrant workers and refugees from the unscrupulous who capitalize on the desperate.

Needing jobs to survive, migrants and refugees often find themselves in limbo in labor disputes with their employers.

"Workers are terminated when they file complaints," says Das.

Meanwhile, a subcontractor who wished to be identified only as Chua, foresees a difficult year ahead if the government trims projects and contracts.

"I [will] still look for them [foreign migrant workers] as they are good workers … but it won't be so much this year I think," he said when met at a project site.

"When I finish this I'll have to wait [to be paid] … maybe a few weeks or a month. But I have to pay my workers when they finish the job [if not] they won't work for me the next time," he says.

"Times will be challenging for Malaysia in 2016," he said when announcing revisions to the 2016 budget.

Mariam, who works as a domestic help, is already feeling the first hints of difficult times ahead.

She's on the look out for work after her last employer released her. Demand for housekeepers is strong but it's a dodgy market and switching employers is not easy. The fees add up to about 3,000 ringgit (US$685) which is deducted from her salary of 700 ringgit (US$160) a month.

Her tolerance for abuse is remarkable. Despite glowing referrals from a previous employer, her current employers, she says, do not appreciate her.

Refusal to acknowledge her presence along with accusations of theft and laziness is what she lives with along with demands to work seven-day a week without compensation.

Asked how she manages, she says simply: "I need the job … I must send money back home."