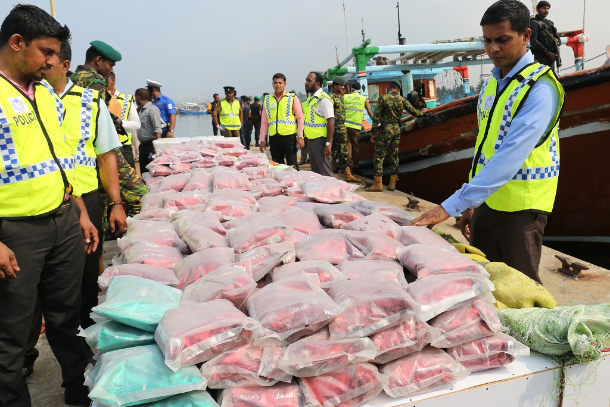 Sri Lankan police officers stand next to packages containing drugs seized by the navy at sea in the Colombo suburb of Dikkowita on March 5. (Photo: AFP)

He said people must ostracize drug dealers in a move to pressure them to reform themselves.

"We do this not because of we want to take revenge on them but because we want to protect thousands of our youngsters," Cardinal Ranjith said during a televised Mass on May 17.

"We know the people who are bringing these drugs to villages. We must protest against them, starting from the politicians right down to the last person."

The Police Narcotics Bureau discovered a massive haul of heroin estimated to be worth 2.25 billion rupees (US$12 million) on May 13. The suspects were arrested while preparing to transport 225 kilograms of heroin concealed in 969 bags containing rice.

Sri Lanka has become a major transit point for traffickers as it tries to tackle widespread drug addiction. Cannabis and heroin have become the top two narcotic scourges in the country.

Authorities burned drugs worth US$108 million from a single intercepted shipment in January 2018. They also destroyed nearly 720kg of cocaine in April 2019.

The country's Catholics, including Cardinal Ranjith, priests and other religious leaders, organized several protest marches and rallies against the surge in illegal drugs in 2019.

The country has been used for years as a transit point for drugs, but now concerns are growing about the local scourge of illegal drugs, especially among young people. Former president Maithripala Sirisena vowed to implement capital punishment for drug traffickers. During his tenure, the government advertised for the position of hangman and more than 100 people applied for the job. A hotline was established for members of the public to report drug dealers.

Colombo parishes organized silent protests in March 2019 when placards such as "Protect our children from drugs" were displayed after morning Mass.

Cardinal Ranjith said all people in Sri Lanka must say no to drugs and tell drug dealers they are not part of society.

"We know who is selling drugs in our villages and we must shut the doors on those people. They have to be marginalized in the villages. You saw how the coronavirus has spread recently due to the undisciplined behavior of drug addicts in villages. How many people were affected due to their behavior?” he asked.

"This is another war that has to be waged in order to protect our future generation. Religion is not like wearing a dress. Religion has to be a daily action that we stand for. Our Christianity, our Buddhism, our Hinduism, our Islam, we must make these principles work in our lives."