The Easter Saturday broadcast has been described as Pope Benedict's last gift. 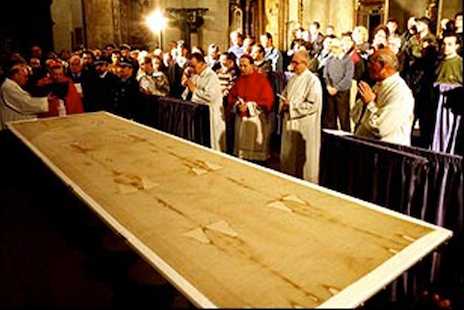 Although Pope Emeritus Benedict resigned last week, he left a parting gift for the world: an unusual display of the mystical Shroud of Turin.

Last week, shortly before Benedict became the first pope in roughly 600 years to resign from the papacy, he announced that television cameras will be permitted to broadcast extremely rare images of the Shroud.

The Vatican described this as Benedict's final gift to the Roman Catholic Church. The Shroud of Turin is one of the Catholic Church's most mysterious and often revered holy relics. Believers say the linen shroud was used to cover the body of Christ after his crucifixion and countless scientific tests conducted over the years have revealed the outline of the body of a man embedded in the fabric.

Relatively few people ever have an opportunity to see the Shroud, so permitting it to be video taped and broadcast to the world is especially significant. The Shroud has also had particular meaning for Benedict, who retired February 28 after almost eight years as pontiff. When Benedict was still just Cardinal Joseph Ratzinger 13 years ago, he wrote that the Shroud was "a truly mysterious image, which no human artistry was capable of producing".

Only once before have images of the Shroud been broadcast, as ordered in November 1973 by then-pope Paul VI. But now, such images will not only be televised by Italian state broadcaster RAI, but also beamed out to anyone with the correct application on almost any kind of communications device.

The broadcast, scheduled for the Saturday afternoon before Easter Sunday on March 31, 2013, will be transmitted from the northern Italian city of Turin, where the Shroud is heavily guarded in a bullet-proof, climate controlled glass case within the city's most important cathedral. Archbishop of Turin Cesare Nosiglia will lead a celebration that is part of the Holy Saturday broadcast and although Benedict is not expected to take part, Vatican officials say the ceremony will allude to the fact that in May 2010, Benedict called the Shroud the "Icon of Holy Saturday".

That day is often marked in a somber silence by the Church, as a quiet period awaiting the Easter Sunday resurrection. However, Benedict has said that the Shroud speaks of pain but also the hope of new life - something Nosiglia said he hopes the March 30 event will honour. "I hope that this event can bring a little light and peace in these complex times, and give strength and hope to the many poor, the sick, and people in difficulty," Nosiglia said recently.

Besides the televised broadcast of the Shroud event and downloadable apps, a publication of a related book in Italian, English, Spanish, and Portuguese is planned, along with the release of a DVD. Benedict last authorized a public viewing of the Shroud in May 2010, the first since 2000 and also 15 years ahead of its next scheduled public display.