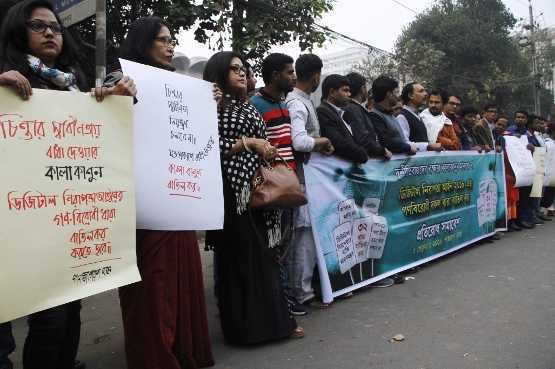 Bangladeshi secular activists protest the Digital Security Act in Dhaka on Feb. 2. The law would mean a journalist could be convicted of espionage for entering a government office and gathering information secretly using an electronic device. (Photo by Rehman Asad/AFP)

Freedom of the press and freedom of expression in Bangladesh face challenges from religious fanatics and from a government that is all out to consolidate power by stifling dissent and suppressing independent media.

Though Bangladesh's constitution guarantees freedom of expression, political Islam has spread its wings since the 1975 coup and consequent military rule. Islam was made the state religion and secularism was removed from the original constitution of 1972.

Eventually, Islamist political parties enjoyed a revival in the South Asian nation of 165 million people, of whom 90 percent are Muslim, despite the country having a long tradition of religious harmony and pluralism.

In recent years, homegrown extremists inspired by regional and global jihadist outfits including the Islamic State and al-Qaeda have killed dozens of free thinkers, journalists and bloggers.

In power since 2008, the Awami League, which led Bangladesh's Liberation War against Pakistan in 1971, has failed to restore the original constitution of 1972.

Pro-Awami League theorists lauded the party's shrewd approach as it kept Islam as the state religion for its political implications.

The Awami League has augmented its power in the present parliament, which does not have an effective opposition as the Bangladesh Nationalist Party (BNP) and its Islamist ally Jamaat-e-Islami boycotted the national election in 2014.

Since 2009, the International Crimes Tribunal has handed down the death penalty to a number of top leaders of Jamaat-e-Islami and the BNP for crimes against humanity during the Liberation War.

Secular bloggers and writers launched the Shahbag movement in Dhaka in 2013 against a "lenient" war crimes verdict against Abdul Kader Mollah, a Jamaat-e-Islami leader. The movement was joined by tens of thousands, and it turned into one of the largest popular movements in the country's recent history. Among its demands were banning religion-based politics and political parties including Jamaat-e-Islami, and confiscation of businesses owned by the party.

The movement also led to a counter movement by Islamist parties and the nation has since seen the killing of secular bloggers, writers and journalists. In 2013, a hit list of 84 atheists, free thinkers, anti-Jamaatis and secular bloggers was widely circulated by Islamist fundamentalist groups.

On Aug. 12, 2015, a group calling itself the Ittahadul Mujahidin sent a letter to the media threatening to kill 19 bloggers, artists, ministers and teachers for being "satanic bloggers", "enemies of Islam" and "atheists."

Bangladesh police recorded that 597 persons were sued for terror links in 2015 when at least 25 people were killed in 26 attacks by suspected militants. The attacks were also aimed at foreigners including priests and religious minorities.

There was a deep sense of fear among free thinkers. Police warned of legal action against those whose writings could hurt religious sentiments. Some police officials even labeled both writers and their killers as extremists.

A deadly militant attack on July 1, 2016, in a Dhaka cafe left nine Italians, seven Japanese, one Indian and three Bangladeshis dead. All these events led to the development of serious self-censorship among all walks of life, especially secular voices and independent and progressive journalists.

In August 2015, Prothom Alo, the most popular Bangla newspaper, reported it had lost at least 35 percent of its advertising revenue, while English-language sister paper The Daily Star's revenue had plummeted about 25 percent.

According to an Al Jazeera report on Oct. 7 that year, the decline in advertising followed instructions from Bangladesh's military intelligence agency to major companies to stop advertising in those two leading independent newspapers after they published on Aug. 16 a story on the army's killing of five men in the Chittagong Hill Tracts, whom they termed as "indigenous" instead of "terrorists."

Daily Star editor Mahfuz Anam in a TV talk show in 2016 conceded that reports published in the newspaper in 2007 alleging corruption by Sheikh Hasina, now prime minister, were based on uncorroborated leaks fed by military intelligence. The fact is that almost all the media then did the same but without admitting it. Anam's admission led to attacks against him from the government and ruling Awami League loyalists. He faced around 80 cases of sedition and defamation.

When the country's most prominent editor faced such actions, other media got the message about the sort of challenge they may face for speaking against the government, however true it might be. Self-censorship in the media became more common.

The law also threatens media freedom. Bangladesh's Information and Communication Technology Act of 2006 has been severely criticized, particularly for section 57, which criminalizes online content regarded as defamatory or blasphemous.

Dozens of journalists, bloggers and rights activists have been charged under this repressive law. Amid local and international criticism, the government decided to revoke the draconian provision only to reinsert it in the upcoming Digital Security Act.

The new law, if passed in its current form, would make the lives of journalists, writers, free thinkers and rights advocates even more difficult.

The government says the law aims to curb online crime and terrorism following a deadly rise of militancy; but the act also includes some controversial provisions that would thwart freedom of expression.

The law entails severe, non-bailable penalties for offenses relating to hurting religious sentiments, defamation, causing deterioration of law and order and instigating against any person or organization through electronic media or websites.

It all means the space for freedom of expression is shrinking fast in Bangladesh and apparently there is no respite in sight in the near future.

Dhrubo Tara (Pole Star) is the pseudonym of a senior journalist in Dhaka, the capital of Bangladesh.