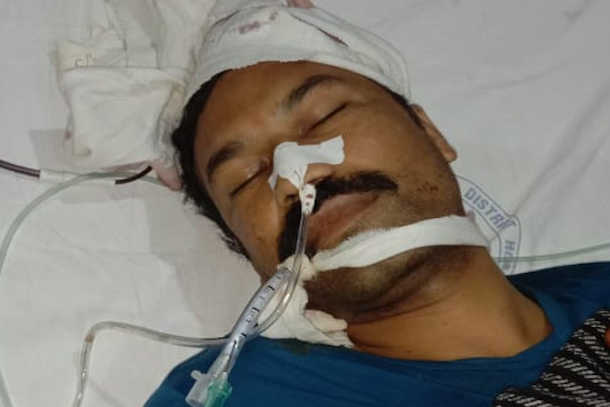 Azeem Gulzar in Civil Hospital Sahiwal in Pakistan’s Punjab province after being shot in a dispute over constructing a church. (Photo provided by the Centre for Legal Aid, Assistance and Settlement)

Azeem Gulzar has been left half-paralyzed after being shot in the head in a mob attack on a church under construction in Pakistan.

Gulzar, 25, was released from the Civil Hospital Sahiwal on Feb. 24, three weeks after his family tried to resist 15 armed men from pulling down the wall of the church. The Christian tailor had donated his 51-square-meter plot in a village in Punjab’s Sahiwal district for a community church. The Muslim-majority village is home to about 150 Christians.

“He is unable to communicate and is paralyzed from the right shoulder down. One of my cousins is recovering from the wound of a bullet that slightly hit his skull. My uncle was also injured with an axe. We are not rich enough to pursue lengthy court cases. Our property is the only hope we had,” Waseem, his younger brother, told UCA News on Feb. 25.

“There is no church in our village. We gather in the house of a local pastor for weekly prayers. We wanted to facilitate the women and elderly who couldn’t travel each Sunday to the nearby city.”

The attack followed months of heated arguments between Gulzar’s family and Muhammad Liaqat, a Muslim schoolteacher who opposed construction of the church on the empty plot that shares a wall with Liaqat’s house.

The District Coordinator Officer had set community consent as a major prerequisite for the registration and issuance of a no-objection certificate (NOC) for the church’s construction. Amid the negotiations, Gulzar’s family erected a front wall and a door at the site on Feb. 2. They were attacked the same night.

“It was Sunday. We spent the whole day building the wall and finished at 7pm. We only wanted to secure our property against any forceful occupation. Three hours later, we heard a crowd chanting on our doorstep. As we tried to explain our stance, someone resorted to aerial firing. My brothers were the next targets,” said Waseem.

Both communities have accused each other of the attack and of injuring rival members in two separate first information reports filed at local police stations.

“Earlier they failed to construct the church after community members succeeded in getting an injunction from a civil court and filed an application to the District Coordinator. Now they have threatened to kill us if we stop them from church construction or illegally occupying the plot,” said Muhammad Aslam, a Muslim villager.

“In order to counter the incident, the alleged culprits have wounded their two partners with gunshots, got an MLC (medicolegal certificate) of the self-inflicted injuries and registered a false case against us.”

Christian families of Chak No. 92-9L have dedicated their upcoming fasts to peace in the area and the recovery of those injured. Meanwhile, doctors in Sahiwal have advised Gulzar’s family to move the father of an eight-month-old infant to Lahore, Punjab’s capital, for better treatment. “Our prayers and fasting will help him to stand again,” said Waseem.

Church leaders are condemning the second church attack in the province in three months.

In November, a mob raided St. Dominic Catholic Church in Waqya Chak village of Arifwala subdistrict, destroying its boundary wall and gate. They also removed a cross from a wall. Church authorities are filing for registration of the church and a NOC.

Last May, a mob attacked two families in Arifwala after a mosque announced on its loudspeakers that Christians had insulted the Prophet Muhammad.

Dominican Father Almas Silaas, who served in Sahiwal district for seven years, highlighted registration of new churches as a major challenge in Punjab.

“Most attacks on the Christian community have personal clashes as their background. We prefer building church on properties owned by the diocese. Local resistance is often encountered in construction on donated lands. They become disputed, especially after the death of the donor,” he said.

Growing religious intolerance in remote areas of Punjab was highlighted as a major concern at a recent consultation on the formulation of a “Harmonious, Tolerant and Safe Punjab for Everyone” policy. Ejaz Alam Augustine, the provincial minister for human rights, minority affairs and interfaith harmony, recently launched the project in partnership with the Youth Development Foundation.

“Culturally, the majority has been insensitive to others’ feelings while expressing their point of view. Religious scholars and those who hold key status in places of worship have no idea about the kind of tragedy their words can bring to others,” Mubarak Aftab Gill, a member of the district task force on human rights in Lahore, told the event.

“Even in this modern era, Muslim families in villages keep separate crockery for non-Muslims. One of the greatest reasons for religious discrimination in our society is eating with non-Muslims, be it eating their food or buying from sources owned by them. This is discriminatory and humiliating.”

In her newly published autobiography titled Free at Last, Asia Bibi described her eight years on death row after being accused of blasphemy in a dispute over a cup of water with a Muslim co-worker on a farm. Pakistan's Supreme Court ordered the release of the Catholic mother in October 2018.

Human rights watchdog Amnesty International, in its annual report for Asia for 2019, accused Pakistan of a failure to control harassment of ethnic and religious minorities and intensifying its crackdown on human rights, including a clampdown on freedom of expression.

“The blasphemy laws continued to be used to persecute individuals and enable human rights abuses in Pakistan. Armed groups carried out attacks on religious communities, and sectarian organizations incited hatred against religious minority groups with impunity,” it stated.