Despite the pacifist teachings of Buddhism, gun crime remains an acute problem in the kingdom 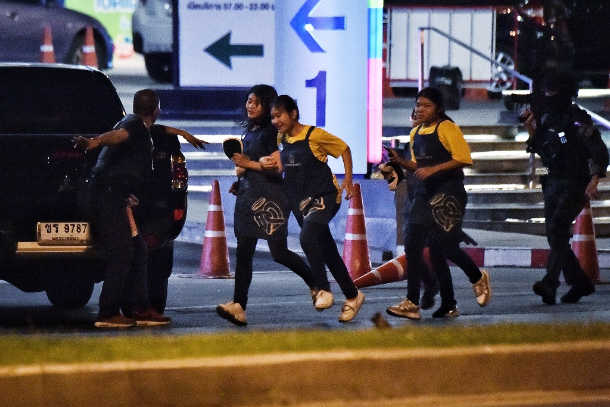 People are rescued by commandos from Terminal 21 shopping mall after a mass shooting on Feb. 9 in Thailand's northeastern city of Nakhon Ratchasima. (Photo: Lillian Suwanrumpha/AFP)

A new spate of deadly shootings in Thailand has refocused attention on rampant gun violence in a country with one of the highest rates of gun-related murders in the region.

In an especially troubling incident on May 27, a disgruntled employee of a radio station in the central province of Phitsanulok opened fire at his colleagues, killing three of them.

The suspect, a 59-year-old mechanic who worked for the National Broadcasting Services of Thailand, told police that he had had shot his colleagues because of “workplace conflicts.”

Among the dead were the radio station’s director and two electricians. Another man was severely injured in the shooting, following which the suspect turned himself in to police.

“No one can say I didn’t have the guts to do it. Don’t underestimate me,” the man reportedly told police after his arrest.

A day before this incident, a man working in a factory in the eastern province of Rayong fired several shots at a colleague who had told him not to smoke inside the factory.

The suspect missed his intended target who managed to escape to safety by running away. Shortly thereafter, however, the gunman shot and wounded his brother-in-law accidentally during a shootout with police before he was arrested.

The man is facing charges of attempted premeditated murder and the illegal use of a firearm.

Gun violence has long plagued Thailand, where an estimated 10 million firearms are in private hands in a country of 69 million. At least four million of those firearms are owned illegally.

Thailand has the highest number of privately owned guns, with 15 percent of people owning a firearm.

Thais need to pass rigorous background checks to own guns legally, yet the country also has a thriving black market in guns.

“It’s easy to get all kinds of guns illegally and many are in the wrong hands,” said Visara Singharaj, a firearms instructor who owns a gun shop in Bangkok.

Not only are there plenty of guns in private hands but many Thais are ready to use their weapons at the slightest provocation. Thailand has the second-highest rate of gun-related killings in Southeast Asia, behind the Philippines, and gun-related murders are commonplace.

In the country’s worst mass shooting in its modern history, a 31-year-old army sergeant major went on a 12-hour rampage in the northeastern city of Nakhon Ratchasima in February.

The soldier armed himself with assault weapons from his army base’s armory and proceeded to kill 29 people and wound 58 others, mostly at a Buddhist temple and a shopping mall.

The soldier said in social media posts that he had decided to embark on his shooting spree because he had been cheated out of money in a property deal with a superior officer, whom he shot dead at the army base before embarking on his rampage.

Experts say many Thais reach for their guns to settle scores with others because a lack law enforcement has created a culture of impunity and distrust in the authorities.

“We have so many extrajudicial killings. [They seem] so prevalent, becoming a sort of norm in Thai society,” said Kasit Piromya, a former foreign minister who has called for stricter anti-gun laws.

Despite the teachings of Buddhism that emphasize non-violence, gun crime has remained an acute problem in this predominantly Buddhist nation, Kasit argued.

“A lot of Buddhist traditions … are all about peaceful coexistence,” he said. “In that sense I think we should do something about gun control. We do have laws, but there are weaknesses about enforcement.”