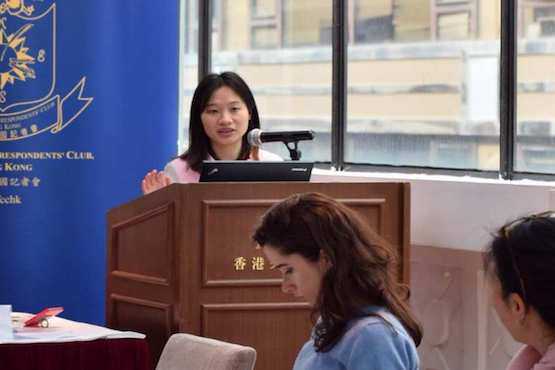 More than 80 percent of female Chinese journalists interviewed for a survey said they had been victims of workplace sexual harassment.

The "shocking" results of the survey were released on March 7, the day before International Women's Day.

Guangzhou Gender and Sexual Education Center and Anti-Sexual Harassment (ATSH) revealed the outcome of the first such survey in China in a press conference at the Foreign Correspondents' Club of Hong Kong.

ATSH founder Sophina Huang Xueqin, a reporter who has worked for a state news agency and a newspaper in Guangzhou, was inspired by the #MeToo campaign last October to launch an online survey after experiencing and witnessing workplace harassment.

The one-month survey received 416 valid samples out of 1,762 responses from 15 areas including Guangdong, Beijing, Shanghai, Hubei, Zhejiang, Shandong and Sichuan.

Most of the valid samples were from heterosexual female journalists aged 18 to 34 who were working for or who had worked for newspapers, magazines and other media.

The data showed that 83.7 percent of respondents (348) had been subjected to varying degrees of workplace sexual harassment, while 42.4 percent (176) had encountered sexual harassment two to four times and 18.2 percent (63) more than five times.

More than 90 percent of the perpetrators were male. Among them, 40.9 percent were victims' supervisors or bosses, 30 percent colleagues, 37.1 percent strangers and 17.3 percent interviewees.

Asked why they did not report incidents, 61.3 percent said filing a report would be useless and unhelpful, while 48.9 percent were concerned it might affect their privacy, careers and personal lives. Among those who chose to remain silent, 48.6 percent did not know the best way to resist and react.

Some 61.4 percent of victims admitted workplace sexual harassment caused a decline in their self-esteem and confidence.

Among those 176 respondents who encountered sexual harassment two to four times, 44 said severe impacts were caused to their personal relationships and social life; 22 resigned; 29 suffered mental distress and depression; and 10 had self-harm and suicidal tendencies.

Huang said the sample collection was not random but the result was shocking and the phenomenon could not be ignored.

She said she did not intend to discredit the media industry but considered it of great urgency to find a way for the profession to set up a mechanism against sexual harassment.

"When victims told me their personal encounters during the survey, they strongly felt that female journalists liked to be strong-willed and resourceful but did not have the courage to report incidents," Huang said.

"How to deal with workplace sexual harassment has become a big challenge."

Based on the survey result that nearly 74.4 percent of respondents had expressed a strong need for anti-sexual harassment mechanisms in the workplace.

Huang said the report will be sent to China's major media, the All-China Women's Federation and the Central Propaganda Department.

A series of anti-sexual harassment training courses and projects will be launched by Guangzhou Gender and Sexual Education Center and ATSH.