An activist of Tehreek-e-Labbaik Pakistan (TLP) carries a poster of founder Khadim Hussain Rizvi during his funeral procession in Lahore on Nov. 21. The hardline Sunni cleric terrorized Pakistan's religious minorities, incited riots and advocated the destruction of European nations in the name of fighting blasphemy. (Photo: AFP)

The compound of a court in Mirpur city of Pakistan-administered Kashmir became a battleground after a Shia Muslim accused of blasphemy was granted bail.

Protesters including lawyers and madrasa students shouted “We want the head of the blasphemer” and “Beheading the only punishment for the blasphemer” at the District and Session Court on Nov. 28.

The mob gathered a day after the district judge granted bail to Wajid Ali Shah, who was accused of insulting First Caliph Abu Bakr, one of the four companions of the Prophet Muhammad, on WhatsApp. Shah was a telephone operator in a government department.

Moments later, protesting lawyers broke the doors of the courtroom and called for the removal of the judge who granted bail to Shah and demanded hanging for the alleged blasphemer. More than 900 have viewed a video that went viral on social media.

“Please back off. I am going inside. The decision will be as per our wish. The judge will go. He will take back his decision,” said Shakeel Raza, a protesting lawyer. Raza and two other lawyers of the District Bar Mirpur were arrested as the protest continued at a nearby crossroads.

“We shall not compromise on the dignity of the holy companions. We are ready to die,” they told local media that had been reporting protests against Shah in Mirpur since September. His bail has been revoked.

According to Waqar ul Husnain, convener of Shia Sherian of Pakistan, Shah was arrested during the recent Ashura, a 10-day mourning period marked annually by the Muslim minority sect during the holy month of Muharram.

Sunni groups often demand the arrest of Shia clerics and eulogists on charges of insulting the Prophet Muhammad’s companions in annual Muharram processions.

In August, around 42 blasphemy cases were registered in Pakistan. According to the Human Rights Commission of Pakistan (HRCP), more than 75 percent of cases were filed against Shia Muslims in relation to speeches made at religious processions.

In September, thousands of activists of mainstream religious right-wing parties, allied with banned outfits, held mass rallies in Karachi against Shia Muslims and demanded the arrest of blasphemers, stricter blasphemy laws and for the Islam Protection Bill recently passed by the Punjab Assembly to be replicated across Pakistan. Newspapers dubbed it as the largest anti-Shia march seen in decades. 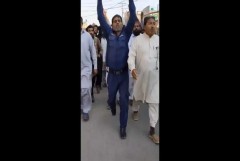 The outcry followed the detention of a Shia cleric in Karachi under blasphemy laws for leading Ziyarat-e-Ashura, a prayer that salutes the martyrs of the Battle of Karbala in 680 AD, on a TV channel on Sept. 13. Pakistan Electronic Media Regulatory Authority issued a notice to the news channel and suspended its license for 15 days. Channel owner Mohsin Naqvi was arrested.

“We condemn the arrest of Shah and other innocent Shias. This is totally wrong. Other allegations include desecration of the Quran. We are being targeted. The recent arrests are a big blow to interfaith harmony,” Husnain told UCA News.

UK-based Asif Mall, who chairs the Pakistan Minorities Rights Organization, renamed Pakistan as “Blasphemistan” in a Facebook post referring to the arrest of Shia worshippers.

“A secular, progressive and democratic Pakistan is the only way to avoid civil war and large-scale sectarian bloodshed,” he said.

Shias, who make up 15 percent of Pakistan’s population of 220 million, commemorate the massacre of the Prophet Muhammad’s grandson Imam Husayn and his family and friends at the Battle of Karbala in Iraq for refusing to pledge allegiance to then Muslim ruler Yazid ibn Muawiya.

Shias blame certain Islamic figures for events that led to the Karbala tragedy, but the same people are revered by Sunni Muslims for being the companions of the Prophet Muhammad. Their conflict intensified in Pakistan in the 1980s after the 1979 Iranian revolution and Saudi-Iranian rivalry.

In 2017, an advertisement in an Urdu newspaper in Bannu district of northwest Pakistan asked for male and female applicants from Christian, Hindu and Shia communities for sweeper jobs. Officials later claimed the word "Shia" was added by mistake and only religious minorities were preferred.

The HRCP claims Karachi is the most affected city by sectarianism.  Five Shias, including a senior doctor, were gunned down in the seaport city last year, it said in its annual report.