Holy month of Muharram marred by violence that has killed dozens 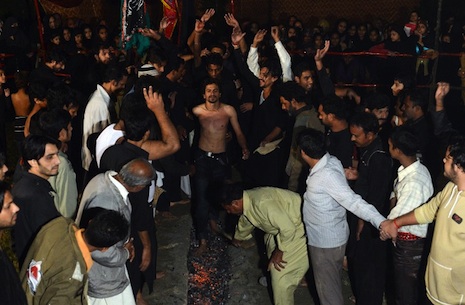 A Shia man walks on coals during celebrations of the holy month of Muharram. Dozens have died in attacks on Shias this week (photo by AFP)

Shia youths across the country have taken up arms to defend their houses of worship during the holy month of Muharram, the first month of the Islamic calendar, amid escalating violence this week targeting the minority Muslim community.

Dozens of people were killed this week in bombings that targeted Shia congregation halls and processions held to commemorate Muharram, during which Shia’s mourn the killing of Hussein Ibn Ali, the grandson of the Prophet Muhammad.

Tehreek-e-Taliban Pakistan (TTP) has claimed responsibility for the bombings, and security forces have stepped up their presence throughout the country.

Young Shias have taken up positions near mosques and other gathering points in an effort to prevent further attacks.

“They are mostly teenagers who volunteer and are posted at entrances and street corners during religious processions in different cities,” said Ammar Yasir, spokesperson of the Shia group Tehreek Nifaz-e-Fiqha.

“A young student who served as a scout was martyred two days ago when he tried to stop a suicide bomber in Rawalpindi that killed 23 mourners and injured 62 others,” he added.

In Lahore a group of seven Shia youths have stood guard at the Gulastan-e-Panjtan imambargah, or meeting hall, for the last eight days.

“[We] are standing guard at every religious hall in the city round the clock. We shall not quit performing our religious obligations for fear of terrorism,” said Sayed Yasir Ali Bokhari, holding a rifle.

A statement yesterday by the Human Rights Commission of Pakistan condemned the Shia killings and warned of the threat of additional violence in coming days.

“The virus of sectarianism that has been eating into the vitals of Pakistan society can be exorcised neither by politicians’ hackneyed rhetoric nor by the antics of ineffective law enforcement agencies,” the statement said.

“Everybody knows who the Shia-baiters are and what new theories to justify murder on account of religious or sectarian differences the latest crop of jihadis have spawned.”

The statement added: “The leaders of the various schools of religious thought … must seriously work towards reviving the indigenous traditions of tolerance, for they are as much responsible for making Pakistan unlivable as anyone else.”

“Al-Qaeda and its affiliates like TTP pose a serious threat to aspirations of our future,” he told the summit.

“We continue and will not allow Islam to be hijacked. We are fighting terrorists and their destructive vision every day.”