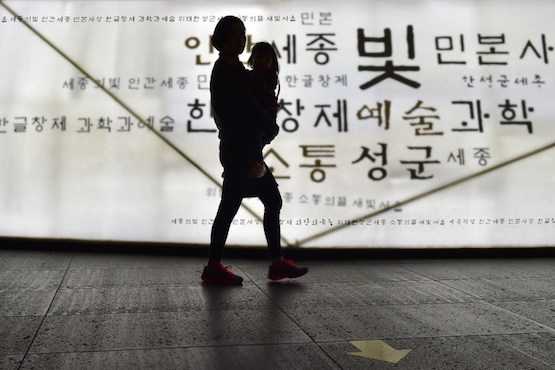 A mother carries her child in Seoul, South Korea's capital. About 2 percent of South Korean children are born out of wedlock. (Photo by Jung Yeon-Je/AFP)

With the help of donors and volunteers, Helen established a home in Seoul eight years ago that provides support and shelter to single women unable to provide for themselves and their babies.

While only 2 percent of children in South Korea are born out of wedlock the support that Helen's shelter provides is in demand due to a lack of government or societal support for single mothers.

"You have to understand that in Korea single mothers are not recognized as real mothers," says Helen, who requested that her surname not be used. "Even the word itself that identifies single mothers in Korean has a negative connotation. These are women who are not fully included in society because of old prejudices," said the 57-year-old Catholic.

For Helen, the issue is also personal. When she was 22 she became pregnant and her father told her she should have an abortion or put the baby up for adoption. In the end Helen had a miscarriage and lost the child.

More often than not, South Korean women without husbands are forced by social pressure to hide their pregnancies before being encouraged to abandon their children. Unmarried mothers or divorcees are also denied government benefits that all married parents in South Korea are entitled to.

In 1980, at the peak of international adoptions from Korea, at least eight out of 10 children sent abroad were born to unmarried mothers. Today things are no different with more than 90 percent of children given up for adoption in South Korea are born to single mothers. The majority of some 20,0000 children in South Korean welfare institutions are children born of single mothers or abandoned children born out of wedlock.

Helen says that the government is encouraging more people to have children to counter the country's low birth rate and rapidly aging population but single mothers are left out of the government's related initiatives.

"We are in a situation where the government on the one hand wants to create conditions to avoid a low birth rate but on the other when it implements its welfare policies there are huge contradictions," says Helen. "One example is that single parents living alone with children pay even higher taxes than married couples with children and a similar income," she says.

About 90 percent of the mothers who have sought help from Helen's home are in a situation where the child's father does not recognize his own son or daughter. This then results in the single mother not being eligible for support services for new mothers who cannot supply information about the child's father.

Hence they cannot access an allowance, the "compensation to encourage fertility," which is bestowed by local authorities at a national level.

The amount varies for each regional government and can be as high as up to 20 million won (US $20,000). South Korean parents are entitled to receive even larger grants for a third or fourth child.

In order to receive social assistance, many city governments require that parents submit documents showing the income of both the child's mother and father.

Mothers have been denied benefits in different regions of the country, for example in Daegu, Gyeonggi, and in the Jung-gu district in Seoul. These women had all been invited to provide information on the child's biological father's income, as well as his residence registry, but they were unable to provide the information because they no longer had contact with their former partner.

Helen tells the experience of a single unmarried woman, who will give birth next month but who has had trouble attaining postpartum support service.

Choi, not her real name, was told she had to present the latest medical insurance premium of the father of the child so that the city government could verify the income. Choi like many other single mothers had no contact with her former partner but through help from Helen's shelter, Choi was able to access some government support.

"Obviously there is no law prohibiting explicitly to grant the allowance to single mothers or unmarried ones," says Helen, "but there are no guidelines on what to do when the single parent does not have information about the income of the former partner.

"We, together with other associations who help unwed mothers, are trying to ask the government to introduce a legislation to ensure that all single mothers will have the same right to social benefits accorded to all parents," she says.

Among the volunteers who help out at Helen's shelter are a number of Catholic high school girls from Seoul Archdiocese.

Currently Helen has 12 women — some pregnant, some with babies — staying at her shelter. On average they stay for one to two years. On a yearly basis, around 20 different single mothers spend time in the shelter.

To help break the stigma faced by single mothers, some South Korean women during the past six years have celebrated Single's Mother's Day on May 11.