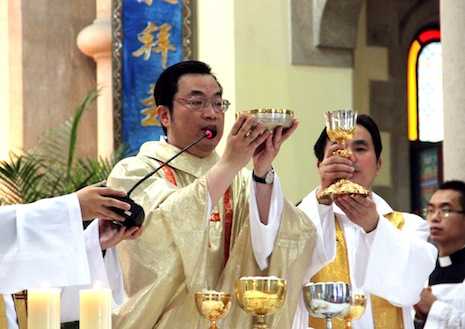 Father Thaddeus Ma Daqin won a majority of votes today to be candidate of Shanghai diocese’s new coadjutor bishop. Among the 205 representatives, including 86 diocesan priests, 55 nuns and 64 laypersons, only 190 were present and cast their votes at the meeting. Fr Ma, in his 40s, was the only candidate. He got 160 votes in the government-required way of “democratic” bishop selection. Two voters rejected and 28 abstained from voting. He received approval from the Vatican recently. Bishop Aloysius Jin Luxian, who heads Shanghai’s “open” community, presided over the election meeting and also cast his ballot. Fr Ma will become the second young bishop to be ordained by the 96-year-old Bishop Jin next month, after the government-sanctioned Bishop’s Conference of the Catholic Church in China confirming the election result. “Nobody mentioned Auxiliary Bishop Joseph Xing Wenzhi at the election,” a Church source said. The bishop, who was ordained in 2005 with Vatican approval and government recognition, faded from public sight since last December. Another source said he has submitted his resignation to the Vatican. In a report published by Vatican Insider on May 25, Gianni Valente wrote that Xing’s resignation was “simply a personal request.” Since the diocese has yet to make any announcement, many Chinese Catholics are filled with doubts and suspicions while remembering Bishop Xing’s strong stance, particularly in two events. In 2006, Bishop Xing withstood political pressure and refused to take part in an illicit episcopal ordination in Anhui diocese, threatening he would rather quit and return to his hometown. In 2010, despite appearing in the government-sanctioned National Congress of Catholic Representatives, he did not put on the bishop’s soutane and zucchetto, and showed an unsupportive attitude to the congress. Despite Bishop Jin’s cordial relation with the government, it is widely believed that Bishop Xing is disliked by the Beijing authorities to be the next leader of Shanghai diocese. Fr Ma, head of the diocese’s Pudong deanery, is a Shanghai native. Bishop Jin appointed him as vicar general shortly after Bishop Xing’s “disappearance.” The priest then began his active presence over Church activities that used to be officiated by Bishop Xing in past years, such as the opening of the Month of Mary on April 30 and the World Prayer Day for the Church in China on May 24. The bishop-elect was ordained a priest in 1994 upon his graduation from the Sheshan seminary. He was once the editor of the diocese’s Guangqi Press, one of the two main Catholic publishers in mainland China. Shanghai, with about 150,000 Catholics, is one of the largest and most prominent dioceses in China. Bishop Joseph Fan Zhongliang, who is not recognized by the government, leads the “underground” community. The 94-year-old prelate has been ill and has lived under surveillance for many years. Related reports Chinese celebrate World Day of Prayer The missing young bishop of Shanghai Young Auxiliary Bishop Of ‘Deep Faith And Prayer’ Ordained For Shanghai Diocese