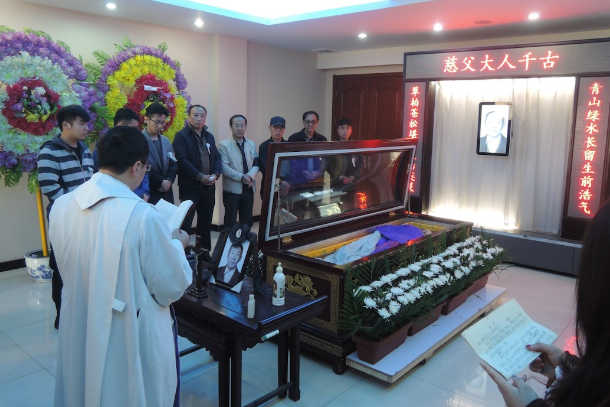 A Catholic priest leads prayers at a funeral parlor in Shanxi city of China in 2017. (Photo: UCA News)

Underground Catholics in China's Shanghai Diocese are upset about their inability to use the city's largest funeral parlor after their priests were barred from officiating prayers in the facility.

Shanghai Diocese in a notice on July 27 said the management of the city's Longhua Funeral Parlor would allow only state-approved priests to conduct  memorial services. Priests entering the parlor to conduct funeral prayers need to present their "Catholic clergy card," also known as a "priest's card," the official identification of state-approved priests.

The Shanghai Civil Affairs Bureau manages the facility, the biggest of several funeral parlors in the city. Shanghai, with some 24 million people, is China's biggest city. The Church in China is divided into the underground church loyal to the pope and the state-sanctioned open church, also known as the Chinese Patriotic Church. An underground priest who wished to remain anonymous told UCA News that the move over the identity card came after funeral prayers were conducted for an underground priest in Longhua. He said the funeral must have attracted the attention of the authorities as it was attended by several priests of both the underground and state-sanctioned churches. "Strictly speaking, the notice should not come from the diocese. It should have come from the Patriotic Association or the Religious Affairs Bureau, who are behind it. They are targeting the priests of the underground community," the priest said. The notice outraged Mei-Yue Liu, a leader of an underground church in Shanghai. She said the authorities were using every opportunity to force underground priests to switch to the state-sanctioned church. She said the move is "disrespectful to the dead but we will not give in to such pressures." Father Paul, a priest of the open church, said he spoke with a diocesan official about the notice but received no clear answer.

"But the notice could not have been issued on the initiative of the diocese," he said. "Nor can the notice come from the funeral parlor, which does not take note of the deceased's religion. The only possibility is that it was issued at the authorities' request."

Many Catholics were surprised by the move of the diocese. "I don't understand why the diocese did this. There hasn't been any major disagreement between the open and underground church groups in Shanghai for years," said Zhang Tianbao, a member of the open church. An attempt by UCA News to contact Shanghai diocesan authorities was not successful. Underground Catholics in Shanghai are worried that the other funeral parlors in the city may also implement the same policy, forcing their people to limit funeral prayers to their homes. "If funeral prayers cannot be done at the funeral parlor, they will ask the priest to hold the service at home first," said John Wu, an underground Catholic. The notice asked the priests to be cautious in handling incense and charcoal under the open flame as a fire alarm system is installed in the parlor. Priests are also asked to remind families not to pour holy water on coffins made of paper and bamboo.