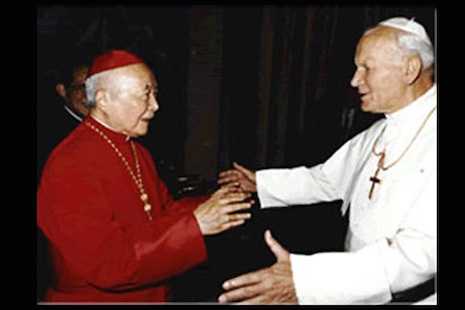 Shanghai Catholics in China and abroad this week commemorated one of the darkest days of the Catholic Church in China: the 60th anniversary of a massive crackdown on the diocese that saw Bishop Ignatius Kung Pingmei thrown in jail for 30 years.

The crackdown on Sept. 8, 1955, the feast of the Nativity of Mary, saw the arrest of then Bishop Ignatius Kung Pingmei (alias Gong Pingmei, later cardinal) and more than 50 priests, including then Jesuit Fathers Joseph Fan Zhongliang and Aloysius Jin Luxian (later coadjutor and auxiliary bishops).

Cardinal Kung was accused of the crimes of supporting the Legion of Mary, excommunicating Catholics who joined the Catholic Patriotic Association (CPA) and refusing to establish a branch of the CPA in the diocese.

In the ensuing month, at least 300 laypeople, mostly members of the Legion of Mary, were also arrested overnight and more than 1,000 Catholics jailed for alleged counter-revolutionary crimes.

Months after his arrest, Cardinal Kung was ordered to make a public confession of his “crimes.” With his hands tied behind his back, the bishop instead cried out, “Long live Christ the King; long live the pope,” according to the Cardinal Kung Foundation.

Security personnel dragged the prelate away and he disappeared from public life until he was brought to trial in 1960. He was sentenced to life in prison.

In Rome, Cardinal Joseph Zen Ze-kiun, retired bishop of Hong Kong, and a small group of Catholics from Shanghai commemorated the event with a Mass on Sept. 8.

The commemoration was organized by Jesuit Father Matteo Chu, who lives in Taiwan. Father Zhu Yude, his elder brother and vicar general of Shanghai’s underground community, was not allowed to leave China to participate.

“I hoped more heroic stories of how the Shanghai Catholics defended their faith could be published for more people to know,” Cardinal Zen told ucanews.com earlier.

In Shanghai, Ignatius Xu, an elderly layman, told ucanews.com that his priest preached during a Mass preceding the commemoration that Sept. 8 is “a date worth remembering” because Catholics arrested in the crackdown “suffered for their faith.”

“The theme of the commemoration was designed to be a blessing rather than (an occasion) of sadness and enmity,” Xu said.

When religious activities in China revived in the 1980s following the Cultural Revolution, many priests who had been caught up in the 1955 crackdown returned to Shanghai. They became a major force in the “underground” Catholic community, Xu said.

Cardinal Kung wasn’t released from prison until 1985. By then, he had already been named cardinal, while in detention, by Pope John Paul II. Cardinal Kung died in 2000.

Currently, Fathers Lu Peiyuan and Yan Zhi’en are the only two priests who had gone through the crackdown and remain alive in Shanghai.

“Father Lu, 93, is still in good health. He can stand all through the Mass and can celebrate up to three Masses a day,” said a layman who identified himself as Paul.