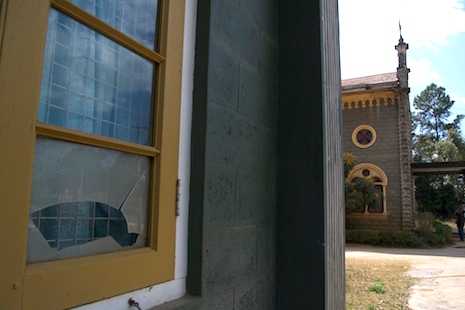 A window at the Immaculate Church in Kutkai, northern Shan state, was broken on February 24 by shrapnel from a small artillery shell. Photo taken on March 5, 2015 (Credit: Simon Lewis)

Kutkai Township, located between the cities of Lashio and Muse on the main overland trade route between Myanmar and China’s Yunnan province, has seen an influx of internally displaced persons so far this year as clashes between Myanmar government forces and a number of ethnic armed groups operating in the region have intensified.

It is rare for the conflict to directly impact the local Catholic Church, but Kutkai’s parish faced suspicion by the military following an incident on the night of February 24.

Father John Sau Luk, the parish priest, told ucanews.com that a bomb attack followed by a brief skirmish took place close to the front of the church’s compound that night.

“Three shells were fired at the church. Two exploded and one did not, so the army came to deal with the unexploded shell on Wednesday” the priest said in an interview on Thursday.

“When it happened I crawled under the bed. My assistant parish priest was sleeping in his room and some shrapnel hit the window and smashed it.”

In addition to the window in the priest's quarters, one of the windows on the facade of the church itself was also broken.

John Sau Luk said the shells were only about 10cm long but sent small pieces of metal flying in all directions.

It was not clear who was responsible for firing the shells. As well as the Myanmar military and a local government-backed militia group, fighters of the Kachin Independence Army, the Ta’ang National Liberation Army and the Shan State Army-North are all known to be active in the area.

“They blindfolded three of us and hit me with the butt of a rifle,” said one of those questioned, a 19-year-old who helps out with gardening in the church compound, who asked that his name be withheld.

All six men insisted they were not involved in the clashes the night before, he said, but they were interrogated, often violently, for five hours by the military before being handed over to the police and later released.

“They accused us of being rebels, and shouted at us: ‘Where are the guns? Where are the bombs?’” the young man said.

“One of the others couldn't speak much Burmese, so they beat him more,” he added. The majority of Catholics in Kutkai belong to the Kachin ethnic minority.

Recent fighting in the area around Kutkai has led to 450 new internally displaced people taking refuge in the township since the start of 2015, according to the United Nations Office for the Coordination of Humanitarian Affairs (UNOCHA).

Hundreds of people are already living in temporary camps in the town — including one situated in the Catholic church compound — and elsewhere in northern Shan state, where fighting has spilled over from the four-year old conflict in Kachin state to the north.

At least 30,000 people have fled over the border into China, where humanitarian access has been limited, and according to UNOCHA around 13,000 people, mostly ethnic Bamar migrant workers, escaped westward, many returning to their homes in central Myanmar.