A South Sudanese government minister is optimistic about the chances of successful implementation of the revitalized peace agreement in his troubled country.

Stephen Par Kuol, minister of peacebuilding, said all parties to the agreement are working to consolidate lasting peace despite the challenges facing its implementation, including communal violence and Covid-19.

Although political violence has largely subsided in South Sudan since the signing of the peace agreement, inter-communal clashes continue to result in the killing and injuring of civilians, cattle rustling and the looting of property.

“We are working on proposals on how to address communal violence in many areas in the country,” said Par.

"We are developing peace initiatives with the newly appointed governors. We have also made progress in establishing relationships with partners and some influential community leaders in the country.”

The minister reiterated the transitional government’s commitment to restore peace and stability in South Sudan, saying they will focus more on how to address communal violence after the finalization of governance structures throughout the country.

The Shalom Center for Conflict Resolution and Reconciliation (Shalom-SCCRR) — founded by Irish missionary Father Patrick Devine — has always taken an active role in advocating for peace and educational development in South Sudan and Sudan. Both countries are members of the Intergovernmental Authority on Development (IGAD) with which Shalom has signed a memorandum of understanding.

The progress of any country in meeting basic human needs, governance and the realization of human rights relies heavily on the progress of education, among other factors. Education is more than just a fundamental right for children all over the world — it is an opportunity that paves the way to a successful and productive future for those who are fortunate to attain it.

However, education systems cannot be fully insulated from the effects of violence. In most African countries, education has consistently and systematically been negatively impacted by cycles of conflict.

In the case of South Sudan, over two decades of civil war combined with the cumulative effects of years of conflict, political instability and extreme poverty, have tremendously impacted on education systems for generations. "Run for your lives" warning in new state of South Sudan 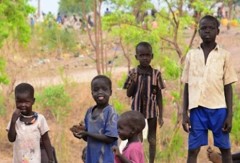 According to UNICEF, more than two million children (over 70 percent) are out of school there, putting their future and the future of this young country at risk. Most of these children are girls, child soldiers, children with disabilities, and children who are just too hungry, too busy working to help their families, or too afraid to be attacked on their way to or from school.

Across South Sudan, demand for education is high and rising. However, without infrastructural development, it will be difficult for the country to generate equitable learning opportunities and economic dynamism needed to build advanced human development and shared prosperity.

Shalom-SCCRR recognizes that conflict has a devastating impact on education both in terms of the suffering and psychological impact on learners, teachers and communities and on the degradation of the education system and its infrastructure. It is from this background that Shalom-SCCRR has been contributing to post conflict reconstruction in the IGAD countries, including South Sudan, through the implementation of its school educational and development projects.

In response to the UN’s Sustainable Development Goals for achieving a better and more sustainable future for all, Shalom-SCCRR has been proactive in supporting education in South Sudan since 2011. It has provided teaching, learning and development support to primary, secondary and tertiary institutions in the form of renovation and construction of classrooms and standard latrines, installation of solar lighting systems, provision of school furniture (desks, lockers, tables and chairs) and providing support for boarding facilities (beds, mattresses and mosquito nets).

Over the past 10 years, Shalom-SCCRR has implemented school educational and development projects directly benefiting over 6,000 learners and teachers and indirectly benefiting a population of about 30,000 other members of the community.

Facilities in most of the schools in South Sudan are still insufficient and some are not even up to the required quality. Shalom-SCCRR is supporting the construction and renovation of facilities — mainly classrooms, toilets and dormitories — just like in other parts of IGAD countries. This has led to an increase in retention and enrolment of pupils. For example, Nadapal/Narus Comboni Mixed Primary School was supported through construction of three classrooms that are benefiting more than 300 pupils. Shalom-SCCRR has provided solar lighting systems to over 10 institutions in South Sudan. This has improved security for both learners and teaching staff. Moreover, there has been significant improvement in academic performance as students now have ample time to study both in the early morning and late evening within the premises.

The Good Shepherd Peace Centre was supported with 204 panels and solar batteries. The centre is a place for peacebuilding and trauma healing for South Sudan. Father Daniele, who oversaw the implementation of the project, noted that the solar units are enough to light and provide the power needed to run all the centre’s operations and activities.

Pupils and students spend an average of eight hours in classrooms. However, if the classrooms are not conducive for learning, the level of concentration among the learners is hugely compromised. In South Sudan, an average of five students share a desk or sometimes even sit on the ground during classes. Shalom-SCCRR has provided desks, lockers and chairs to these schools. For example, St. Bakhita Girls’ Secondary School in Narus was provided with 100 lockers and 100 chairs for 248 pupils.

Most of the pupils and students attending schools in vulnerable and pastoralist communities in East Africa walk to and from schools every day. The average distance covered by these children to access education is 12-20 kilometers per day. This leaves them exhausted and affects their concentration during classes. Moreover, children face being attacked by wildlife or bandits on these roads.

Shalom-SCCRR is providing boarding facilities by building dormitories and supplying beds and mattresses.

Girls are now remaining in schools and are safe from early school dropout attributed mainly to premature pregnancies and forced marriages while living at home. For example, Shalom-SCCRR supported a girls’ secondary school in Narus with 72 beds.

Education in South Sudan is becoming a means through which people find hope in their lives. Through improvement of school infrastructure and provision of learning and teaching materials, Shalom-SCCRR envisions a better future for the people of South Sudan.

By being in school, boys from pastoralist communities are saved from the warrior tradition where young men are seen as the strong ones to execute inter-communal attacks and livestock raids. Girls on the other hand, are saved from premature pregnancies and early marriages, thereby being empowered to forge a better future where they can participate in leadership and formal decision-making in their communities.

Shalom-SCCRR believes in education which empowers communities to be the architects of their own peaceful futures and sustainable development. Its work would not be possible without the continuous support and contributions from donors and friends, particularly in the USA, UK and the Republic of Ireland. Donations can be made via via Shalom's website.

Matt Moran lives in Cork in the Republic of Ireland. Author of ‘The Legacy of Irish Missionaries Lives On’, his forthcoming book is ‘The Theology of Integral Human Development: the Role of Faith in International Development and Public Affairs’.