The best way to honor the Catholic activist is to renew our efforts to defend everyone's right to live freely and in peace
Published: March 02, 2021 03:58 AM GMT ▾

Ten years ago today, I woke up and, as usual, switched on the radio and turned on my computer. Within seconds I received the news that I had long feared and expected, though hoped would never happen: the assassination of my friend Shahbaz Bhatti.

For over five years from 2004 to 2009, I worked side by side with Shahbaz. Not a week went by without a phone call, often several, and almost daily email exchanges.

He was then a young and courageous Catholic grassroots activist, the co-founder of the All Pakistan Minorities Alliance. We traveled together in Pakistan several times, and on one occasion we missed a bomb in Islamabad by just five minutes. We had been in a meeting with others in the Marriott Hotel over dinner and had left moments before the explosion.

On another occasion, we sat together with a seven-year-old Christian girl who had been brutally raped and tortured. Shahbaz was helping her and her family because nobody else would.

The experiences I had the privilege — and heartache — of sharing with Shahbaz created a deep bond between us. I will never forget a night in 2007 when a Christian community in Charsadda in the North-West Frontier Province faced a deadline for an ultimatum they had been given by extremists: convert to Islam or face the consequences.

I had been advocating to the international community for some assistance or protection for this community, with little success. As the deadline approached, I sat alone in my home in London thinking about this beleaguered community and the potential danger awaiting them. As the clock ticked, I went back and forth in my mind as to whether I should phone Shahbaz. For some while I went from thinking “well, he’s busy, and he will update me if there’s any news, I shouldn’t bother him” to “I should give him a call to check in and express my concern”. My ridiculous mental meanderings got me nowhere, so I dialed his number. Within seconds he answered, down the clearest of lines, and told me he was in Charsadda, which I didn’t know.

What he told me next has stayed with me forever. “Ben, thank God you called,” said Shahbaz. “The community is terrified. They are expecting an attack at any moment, and they think no one in the outside world knows or cares. The mere fact that you called means I can reassure them that there is one person out there who does know, who does care, who is praying and who is speaking out and trying to help: one who cares enough to telephone to find out how they are. That will give them strength and encouragement.” And in fact, miraculously, the expected attack never came.

Shahbaz moved from frontline activism to full-time politics, being elected to the National Assembly in 2008. Within a few months, he was appointed Pakistan’s federal minister for minorities affairs. But his motivation was always and unwaveringly the same: to help advance human rights, especially for Pakistan’s minorities and for the poorest and most marginalized.

It was the first time that ministerial position was held by someone who truly wanted to make a difference, was serious about reform and who was so widely respected rather than being a tokenistic minority representative. The respect in which he was held was illustrated by the fact that it was the first time the position he held had ever been given cabinet rank.

Shahbaz made the most of his almost three years as a minister, in the way he made the most of everything. He fought for the rights of people of all faiths, for women and for a coalition to stand against extremism and intolerance. In his final months he was making headway, building relationships with Islamic clerics, visiting mosques, addressing large gatherings of religious leaders and bringing people together.

He continued: “This is the key objective of my life — to live for those who are voiceless, who are suffering. We need to change the plight of those who are living in the darkness of persecution, victimization, and that is the commitment we made, to bring justice for those who are denied justice.”

Shahbaz challenged head-on the “forces of intolerance”, promising that, in unity with others, “we will not allow you to capture our country”. He called on his audience to join with him in this struggle: “Let’s pledge that we will work together to promote harmony and tolerance. We will bridge the gaps among different faiths. We will strengthen this world with the message of peace and tolerance.”

At the heart of Shahbaz’s work, particularly as minister, was an effort to reform or repeal Pakistan’s notorious blasphemy laws, which have been so widely misused with such disastrous consequences for many.

But it was this campaign that in the end cost Shahbaz his own life. On March 2, 2011, he was assassinated — gunned down in broad daylight on his way to work. Four months before his murder, he recorded an interview with the BBC for broadcast in the event of his death. He said: “These Taliban threaten me. But I want to share that I believe in Jesus Christ, who has given his own life for us. I know what is the meaning of the Cross and I am following the Cross. I am ready to die for a cause. I am living for my community and suffering people, and I will die to defend their rights.”

The day after Shahbaz’s murder, I wrote an op-ed titled “Yesterday, Pakistan lost its Martin Luther King”. I truly believe that. Over the years I have written many articles in his memory, including one headlined “Behold a martyr for religious freedom”.

My friend Shahbaz is indeed a modern-day martyr. A cause for his beatification has been started and I hope it will be recognized soon. In the meantime, his personal Bible is on display in the Basilica di San Bartolomeo all’Isola in Rome, in a commemoration to modern-day martyrs, and every single time I go to Rome — without fail — I make a point of going to the Basilica to spend a few moments in prayer and reflection in front of my friend’s Bible. It’s an absolute priority, and a pilgrimage, for me.

The best way to honor Shahbaz on this 10th anniversary is to renew our efforts to defend the rights of every single human being to live freely and in peace. Tributes to and reflections on the life of Shahbaz Bhatti — such as a remarkable memorial held today bringing incredibly distinguished world figures together — are wonderful and right and proper. But they will only have real meaning if they result in us all working to continue the fight for which Shahbaz gave his life. Let’s turn his vision and his legacy into our reality.

Benedict Rogers is a human rights activist, writer and senior analyst for East Asia for the international human rights organization CSW. He is the author of six books, including “From Burma to Rome: A Journey into the Catholic Church”, which features the story of Shahbaz Bhatti. The views expressed in this article are those of the author and do not necessarily reflect the official editorial position of UCA News. When the genie is out of the bottle 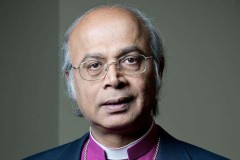