William Grimm, a native of New York City, is a missioner and presbyter who since 1973 has served in Japan, Hong Kong and Cambodia.
Seventy years after WWII, can Japan be as repentant as Germany?
Published: April 21, 2015 06:46 AM The 70th anniversary of the end of World War II is approaching. This month, Japan’s Prime Minister Shinzo Abe will speak in Indonesia and the United States, two countries that suffered as a result of Japanese military aggression in that war.

The speeches will be at an Asian-African summit meeting in Jakarta that begins on April 22 and at a joint session of the US Congress on April 29.

It is estimated that the Japanese killed some 375,000 Indonesians during their occupation of that country. The US military lost about 106,000 lives in the Pacific theater of the war (compared with about 186,000 in the European theater).

People in countries that suffered under the Japanese, especially perhaps China and the two Koreas, will be looking carefully at Abe’s speeches to get hints of what he might say in August, the anniversary of the end of the war. They will be looking in particular for expressions that either accept or downplay responsibility for the war.

In 1995, a socialist prime minister of Japan, Tomiichi Murayama, expressed "deep remorse" over the war and subsequent governments have affirmed this wording, but Abe and his political supporters seem inclined to step back from even that degree of acceptance of responsibility.

Some countries’ governments are calling for a declaration of responsibility and an apology for aggression and cruelty, as has been done by Germany for its part in the horrors of the last century.

Though there are still people who are owed apologies or more — for example women who were forced to work as sex slaves for Japanese troops — it is not likely that they will get what they want and deserve. It is probably futile to put great hopes on what Abe might say because his style of patriotism precludes criticism of Japan.

There is another factor to keep in mind regarding Japanese attitudes toward the war. Most Japanese have no memories of it, having been born since then. Abe himself was born nine years after the war ended. It is a remote event that people feel has no connection to them. They probably would not care one way or the other about expressions of guilt and remorse about something that happened when their grandparents were young.

However, there are some hyper-nationalist Japanese on the right fringe of the political spectrum for whom any admission of war guilt is anathema. They are a force that Abe must reckon with for two reasons. The first is that they can be generally counted upon to support his Liberal Democratic Party and, more importantly, his faction within that party. Alienating them could prove politically costly.

The second reason is darker, a sign that defeat in the war and the intervening years of democracy, development and peace have not changed all aspects of Japan’s politics.

The period in the 1930s leading up to and sustaining Japanese aggression against Asia and the rest of the world was marked by what has been called "government by assassination". Right-wing fanatics murdered politicians with impunity if those politicians were not deemed sufficiently patriotic.

That mind-set has not disappeared, nor has political violence. Even today, the right wing in Japan contains people who can and do resort to threats of violence and actual attacks against politicians, reporters and minorities.

Abe’s political survival, at least, depends upon not arousing right wing ultranationalist resentments and responses. Even in the unlikely event that he wanted to do so, he might not be able to say the sort of things that would appease other nations.

So, it is unlikely that he will say anything this month or in August that will satisfy those who want Japan to act more like Germany when it comes to facing up to its past.

Are events of 70 years ago really a major emotional and cognitive reality for them? I doubt it. They may feel some resentment toward Japan’s reluctance to accept more responsibility for the reprehensible actions of its long-ago government and military, but it is not the major lens through which they view the land of manga, anime and J-pop.

And yet, leaders in some (though probably a minority) of those countries that suffered under the Japanese seven and more decades ago continue to make Japanese unwillingness to accept guilt a "big deal". Why might that be?

Just as Abe and others have domestic political reasons for limiting what they say and do in relation to history, so too do leaders in other countries, especially, it seems, in China.

A likely reason is that one way to distract people from current domestic injustice is to arouse "patriotic" indignation about Japanese injustice three or more generations ago. Especially where the government controls the media, this can be a temporarily effective distraction.

However, as time goes on, people may be less amenable to being aroused over the "once upon a time". If so, and as the last of those who lived the relevant history disappear, Japanese downplaying of history and other nations emphasizing it will both likely fade. 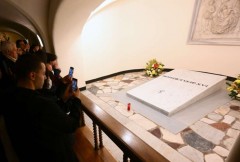