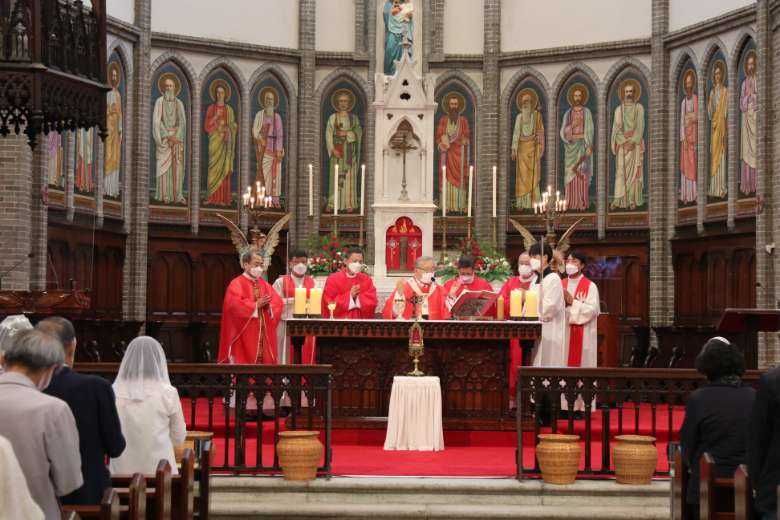 Cardinal Andrew Yeom Soo-jung, archbishop of Seoul, and other bishops concelebrate a Mass to kick off the observance of the Martyrs’ Month on Sept. 1 at Myeongdong Cathedral. (Photo: Archdiocese of Seoul)

South Korea’s Archdiocese of Seoul organized a series of programs and activities in September to pay tributes to Korean martyrs, saints and legendary church figures during the Month of Martyrs.

The Catholic Church in Korea observes September as the Month of Martyrs to pay homage to martyrs and church heroes during the early days of Catholicism whose sacrifice and martyrdom laid the foundation of a church that today boasts about six million Catholics, about 6,000 priests and 12,000 religious.

During the month, the church not only remembers and prays to 103 Korean saints canonized by Pope John Paul II in 1984 and the 124 beatified in 2014 by Pope Francis but also numerous unknown martyrs who were killed by Korean rulers for refusing to renounce their faith.

In Seoul, Cardinal Andrew Yeom Soo-jung, archbishop of Seoul, and other bishops concelebrated a Mass to kick-off the observance of the Martyrs’ Month on Sept. 1 at Myeongdong Cathedral. Due to Covid-19 restrictions, only a handful of faithful were allowed to attend the Mass.

To mark the 200th birth anniversary of St. Andrew Kim Tae-gon, the Research Foundation of Korean Church History published the English translation of a book. The Letters of Saint Andrew Kim Tae-gon: For the 200th Anniversary of His Birth is a collection of the saint’s famous letters that show “the spirit and breath of a man who bravely testified to his faith, lived like a flame as a priest and missionary, and was called by God.”

Through the publication, the institute hopes to realize and recall the spiritual renewal of all clergy, religious and faithful of the Archdiocese of Seoul and the Korean Church. It also aims to publish and spread the life of faith of early Korean Christians who accepted Catholicism without much influence of foreign missionaries.

Meanwhile, the Martyrs Exaltation Committee of the Archdiocese of Seoul hosted “Accompany With Love in September” that featured various exhibitions, performances, walking pilgrimages and Masses to celebrate the Month of Martyrs.

The faithful of Seoul Archdiocese visited martyrs’ shrines and historic sites on the Seoul Catholic Pilgrimage Route, declared as the first Asian International Pilgrimage Site by the Vatican in 2018 and composed of three parts: The Good News Road, The Eternal Life Road and The Unity Road.

The committee has been organizing an annual Korean-Asian Pilgrimage Network project since 2019 to promote organized pilgrimage missions in Asia and Korea and the Asian Catholic Youth for Pilgrimage in Seoul.

Based on the friendship and solidarity among Asian countries sharing a history of persecution and martyrdom, Seoul Archdiocese has been making efforts to contribute to the evangelization of Asia through connecting the pilgrimage sites by its "Open doors to new evangelization" project that aims bind Korean, Asian and world Catholic churches.

About 56 percent of an estimated 58 million South Koreans have no religion, 20 percent are Protestant, 8 percent are Catholic and 15.5 percent are Buddhist, according to official government records.