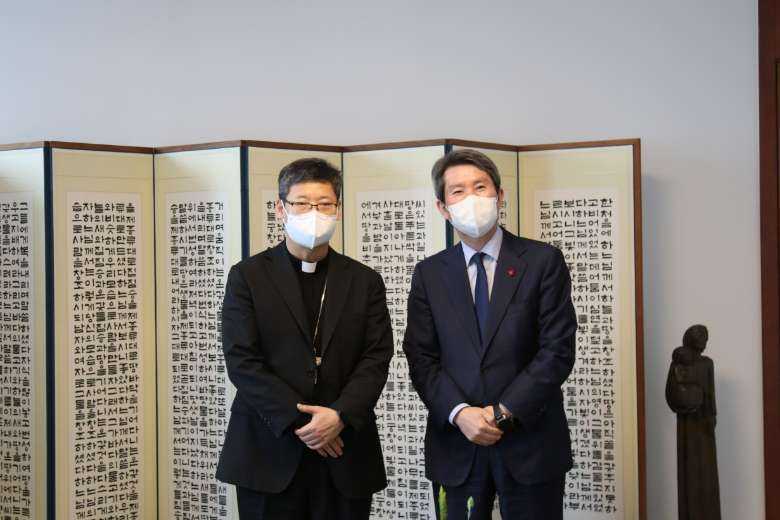 Archbishop Peter Chung Soon-taick of Seoul with Unification Minister Lee In-young during their meeting in Seoul on Jan. 19. (Photo: Archdiocese of Seoul)

Archbishop Peter Chung Soon-taick of Seoul has appealed to the South Korean government to make concrete efforts for peace on the Korean Peninsula.

The newly installed prelate made the call during his meeting with Unification Minister Lee In-young in capital Seoul on Jan. 19.

Archbishop Chung, 60, praised a special exhibition titled "Barbed wire becomes a symbol of peace" organized by the Ministry of Unification. The exhibition at the Church of Saint Ignatius of Loyola in Rome ran from Oct. 29 to Nov. 7, 2021, and drew an enthusiastic response from South Koreans, according to a press release from Seoul Archdiocese.

The prelate thanked South Korean President Moon Jae-in for requesting Pope Francis to pray for peace on the Korean Peninsula.

“As an apostolic administrator of Pyongyang, the North Korean capital, I would like to extend my gratitude to President Moon Jae-in for asking the Holy Father to pray for peace on the Korean Peninsula during his visit to the Vatican,” Archbishop Chung said.

Minister Lee congratulated the archbishop on his appointment as archbishop of Seoul and apostolic administrator of Pyongyang by Pope Francis. He also commented that “the pope has brought comfort and consolation to all Koreans.”

He also appreciated various efforts of Seoul Archdiocese such as providing assistance and humanitarian aid to North Korea through different channels and helping North Korean refugees in South Korea.

The minister praised the Korean Church’s peace-building initiatives such as its “peace pilgrimage” with young people around the world by visiting the Korean Demilitarized Zone and peace research in the form of the Korean Peninsula Peace-sharing Forum, an annual international conference.

He requested the Catholic Church to continue to play an important role in achieving peace between the two Koreas.

Archbishop Chung introduced Lee to “The Korean Peninsula and Synodal Path to Peace 2022: Commemoration, Communication, Communion” as well as other humanitarian assistance to North Koreans and asked for cooperation from the government.

The South Korean government established the Ministry of Unification on March 1, 1969, to deal with all issues pertaining to inter-Korean relations and unification. The ministry reflects the unique reality of the Korean Peninsula, which still remains divided since the end of the Korean War.

The end of Japan’s repressive imperial rule (1905-45) after World War II saw Korea divided into two by the United States and the Soviet Union. The efforts to unify the two nations failed following US and Soviet disagreements in 1947 that led to the deadly Korean War (1950-53).

During the war, communist forces from North Korea invaded the South, leading to 4 million deaths and displacement of some 10 million families. The war ended with an armistice, not a war treaty, on July 27, 1953. It means the nations are technically still at war.

Peace and reconciliation on the Korean Peninsula are major pastoral priorities for the Catholic Church in Korea.

In 1997, Catholic bishops established the Special Commission for the Reconciliation of the Korean People. Each year, on Aug. 15, churches in Korea pray for peace and reunification.