Sense of shock hangs like a cloud over bomb-hit Surabaya

Weeks after suicide attackers targeted three churches the question on many Indonesians' lips is why? 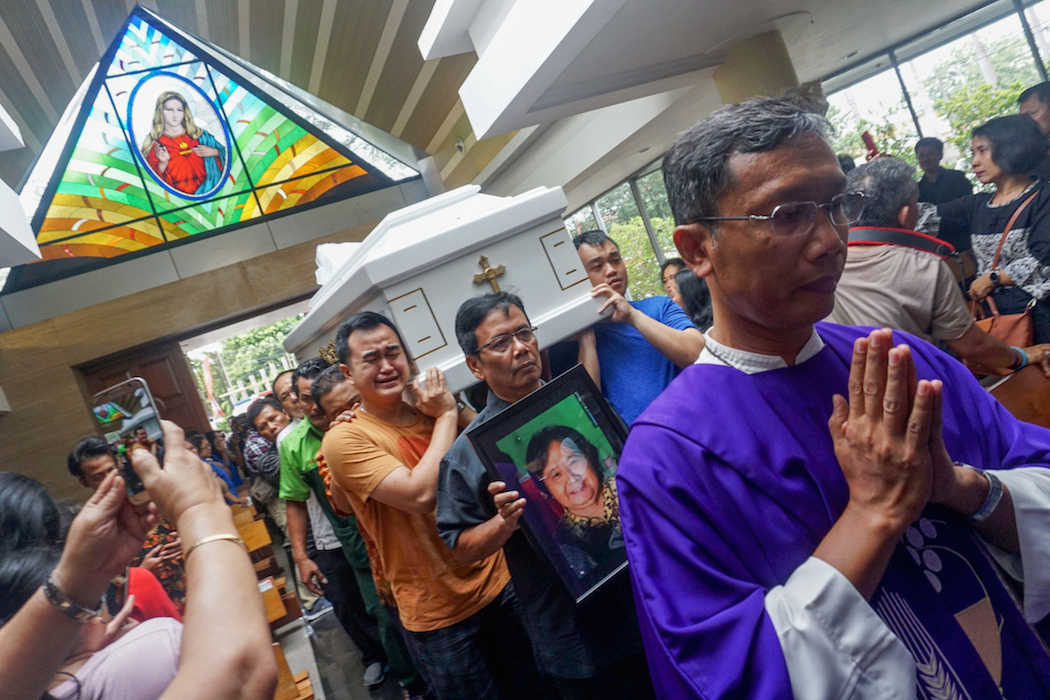 The last time Khori Han saw his neighbor Dita Oepriarto, was "at the hour of the Fajr," the dawn prayer for Muslims.

A few hours later that day, May 13, Dita Oepriarto, his wife Puji Kuswati and their four children aged just 9 to 18, blew themselves up almost at the same time outside three churches in Indonesia's second largest city.

Oepriarto "was very active in the mosque," says Han. "That's where I met him most of the time, because he never missed any of the five daily prayers, but he avoided discussing religion."

Two weeks after the deadliest attacks in the country since the 2002 Bali bombings that claimed the lives of 202 people, the inhabitants of Surabaya, more than 80 percent of them Muslim, continue to look for answers.

"The last time the mother, Puji Kuswat, hosted the monthly meeting of the neighborhood women at her home, they were surprised when their hostess suddenly banned them from singing," said Han, head of the local neighborhood committee.

Still, for Han, there was nothing to make them suspect bombs were being made at the home or that suicide attacks were being prepared by the family.

"The four children were studying in schools run by the Muhammadiyah," considered the most moderate Islamic school of thought in Indonesia.

"To me they were normal people," added the neighbour, who said he was "shocked."

Niko, a member of the Gerakan Pemuda Ansor youth organisation, attended the Mass held in honor of the victims. The Muslim youth was determined to show, by his presence, his solidarity with the families of the victims, who were from the Christian community.

"Why did the parents force their children to commit suicide with them?" wondered an angry Niko.

"For sure they were brainwashed," added the 18-year-old.

"We came to help the police guarantee the safety of the ceremony," said Niko, a mission that Gerakan Pemuda Ansor had already undertaken at Christmas.

Immanuel Harpha, who traveled expressly for that purpose from Jakarta, the first city in Southeast Asia to have been hit by a suicide attack by the so-called Islamic State (IS) — in February 2016 — feels that the terrorist threat is "even more serious" today.

Last February, after trying in vain to join IS in Syria, a man armed with a sword burst into a church in Yogyakarta, in the centre of the archipelago.

'We're praying to find the courage to forgive'

Is there greater intolerance against religious minorities today?

Like many Christians, who represent 9 percent of Indonesia' population of Indonesia, the world's most populous Muslim nation, Harpa weighs his words carefully.

"It's a pertinent question, but I really do not feel like making the situation worse," said Harpa.

"After those horrible attacks, I think we have a greater need to share a message of love and forgiveness. Today we are praying to find the courage to forgive. Of course, I am afraid, but I refuse to let that feeling dominate me."

Johannes Negruho, a writer who hails from Surabaya, said his city is not reputed to be a cradle of extremism.

Raised in a Catholic environment, Negruho today says he has no religion. He blames a government which, he says, is "in denial" about the rise in radicalism after the various events of the past few months.

"For most Muslims, those who commit terrorist attacks cannot be considered true Muslims," Negruho noted.

"The others, those who belong to religious minorities, pretend to agree because they do not wish to offend their Muslim fellow citizens. Unfortunately, in today's Indonesia, the majority religion, Islam, sometimes has the mentality of a minority faith, that is to say, it tends to imagine it is being persecuted."

The Surabaya attacks, for which IS claimed responsibility, have tarnished the national image, as has the jailing of the former Christian governor of Jakarta for blasphemy in 2017 after he made one statement too many on the Quran and the rise of the Islam Defenders Front, FPI, an extremist group behind many violent attacks, including a recent one on a church in the centre of the country.

Nevertheless, the moderates are in the majority and they unanimously condemn the terrorist attacks.

Just after those in Surabaya, Indonesian President Joko Widodo condemned what he called were "attacks against humanity", stressing, in a bid to restore calm, that there was "nothing religious about terrorism."