Reverend Soritua Albert Ernts Nababan, a leading international ecumenical figure, has died at the age of 87. (Photo courtesy of the Communion of Churches in Indonesia)

Reverend Soritua Albert Ernts Nababan, a Protestant pastor widely recognized both in Indonesia and the world for his ecumenical work, has died at the age of 87.

He died on May 8 in a Jakarta hospital from respiratory problems.

Communion of Churches in Indonesia chairman Reverend Gomar Gultom paid tribute to the pastor, saying his death was a big loss to the ecumenical movement, both nationally and internationally, and would be felt particularly among Indonesian Christians.

“At the international level, he played a significant role in fighting for justice as well as trying to create peace,” he said.

He was very vocal in trying to address the disparity among rich and poor nations, from the sixties onwards, he said.

“He was very active in urging the World Council of Churches to collect aid from among churches in the rich north to be distributed to those in the poor south,” he said.

Father Antonius Benny Susetyo, a member of a presidential unit promoting communal tolerance in Indonesia, said Reverend Nababan was a leading figure in promoting unity among Christians in Indonesia and the upholding of their rights.

“He was a figure who could embrace all and had a strong commitment to promoting interfaith dialogue. I often talked with him about issues faced by churches in Indonesia, he told UCA News.

These included issues such as the refusal to grant construction applications to churches by some local authorities, often because of opposition from Muslim hardliners, or the revocation of such permits for similar reasons.

He pointed to the longstanding case of the Christian Church in Indonesia (GKI Yasmin) in Bogor, West Java province, that has been banned from using a church because of alleged irregularities regarding a 2006 building application. 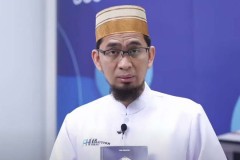 “Even though he was a senior figure, he was never reluctant to learn from those younger than him.,” Father Susetyo.

On the international front, he served as secretary of the youth wing of the Christian Conference of Asia and then became its chairman.

The late pastor was to be buried in his hometown of Tarutung on May 10.