Relatives of victims of drug-related killings cover their faces with masks as they light candles for their loved ones at a memorial for human rights abuse victims on Nov. 2, All Souls' Day . (Photo by Maria Tan)

Students at a Jesuit-run seminary in Manila have joined growing calls against the "merciless and senseless deaths" brought about by the Philippine government's anti-narcotics war.

In a statement issued on Nov. 2, All Souls' Day, the seminarians condemned what they described as the "blatant disregard for the dignity of life" by those behind the killings.

The seminarians issued the statement days before a scheduled huge religious procession along the capital's major thoroughfare to pray for an end to the killings.

In the statement, the seminarians quoted Cardinal Tagle who said Catholics "cannot allow the destruction of lives to become normal."

"We cannot govern the nation by killing. We cannot foster a humane and decent Filipino culture by killing," said the prelate in a statement issued earlier this year.

As Filipinos marked All Souls' Day, the seminarians vowed to commit themselves to “promoting the church’s programs for rehabilitation of the victims of drugs, and the church’s support for those affected by these killings."

Candles for the disappeared 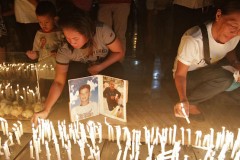 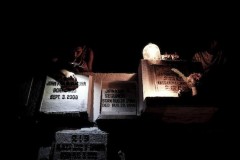 Earlier in the day, relatives of victims of drug-related killings and enforced disappearances lit a thousand candles at a memorial for victims of human rights abuses in Quezon City.

"We shall tirelessly light candles and offer flowers for the disappeared," said Concepcion Empeno, mother of a missing activist.

"We are indignant and we are in search of justice," she added.

Cristina Palabay, Karapatan secretary-general, said cases remained unaddressed despite a law against involuntary disappearances "because no one has been made accountable."

"State policies continue to legitimize the act of abduction and allow, directly or with complicity, the perpetuation of such crimes with impunity," she said.

During President Rodrigo Duterte’s term, four cases of enforced disappearances have been recorded so far.

"The families of victims of enforced disappearances and extrajudicial killings are one in holding the state accountable for these heinous crime and violent transgressions of human rights," said Nilda Sevilla of the group Families of Victims of Involuntary Disappearances.

She said families of the disappeared and victims of killings must together "break their silence and the culture of impunity" in the country.