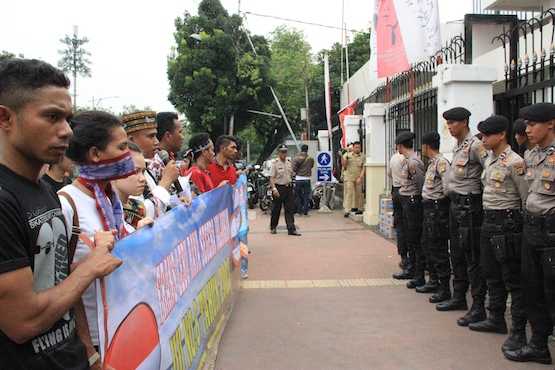 According to the protesters, the provincial government officials recently granted a 25-year concession to an investment company, which plans to construct hotels on Pede Beach near Labuan Bajo in West Manggarai district.

The move will take away people’s right to freely enjoy a place of outstanding beauty and will destroy nature according to Franciscan seminarian Charles Lelu Umbu Sogar Ame Talu.

"This sort of privatization is a systematic effort to mortgage people. According to Pope Francis’ encyclical Laudato si’, such a scheme fertilizes the culture of marginalization," he said.

"People are marginalized because their rights to enjoy green space and to earn a living are taken away. This marginalization is a concrete expression of the culture of death, which is often practiced by those with power," said the seminarian and member of Justice, Peace and Integrity of Creation in Indonesia, a church environmental group.

The Catholic Church must not stay silent on this, he said.

"We want him to summon Governor Frans Lebu Raya and West Manggarai District Head Agustinus Ch Dula. He must soon intervene in this case," he told ucanews.com.

He also referred to a 2003 law enacted after West Manggarai was established as a district that stipulated that authority over land in the district lay with the district.

"The governor ignored this stipulation and gave the land to investors," Nggarang claimed.

During the rally, some protesters meet with Wahyu Negoro an official from the ministry’s legal bureau who agreed to summon the governor and district head.

"We will soon talk about this," Negoro said.

He agreed that development programs should prioritize local people and that laws governing local authorities should be followed.