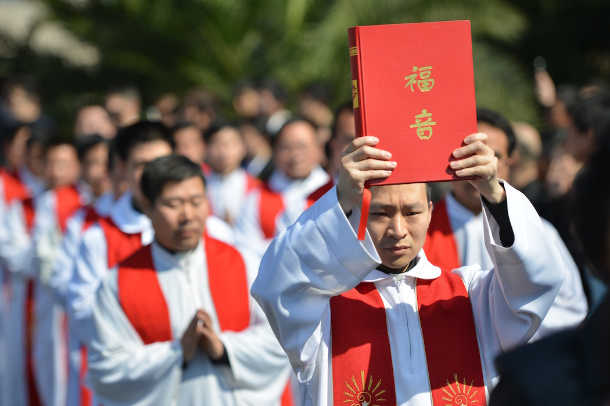 A file image of clergy arriving for the funeral of the late head of the underground Catholic Church in Shanghai, Bishop Joseph Fan Zhongliang on March 22, 2014. Some Catholics from the Shanghai underground church community say that self-styled bishop Zhang Tongli was supposed to be Bishop Fan’s successor. (Photo by Peter Parks/AFP)

A Chinese underground bishop who is not recognized by the Vatican is planning to ordain bishops without papal permission.

Zhang Tongli, who claims to be a bishop in Shanghai’s underground church, admitted to ucanews.com that he has a plan to ordain new bishops — a move that has aroused concern among some underground community members.

Zhang reportedly received a secret ordination in 1999 from the late coadjutor bishop of Kaifeng in Henan province, Anthony Zong Changfeng, under a privilege given by Pope St. John Paul II to the China Church in the 1980s.

Some say Zhang was supposed to be a successor to the former bishop of Shanghai, Joseph Fan Zhongliang, but the Vatican does not recognize his episcopal identity and prohibits him from overseeing any diocese.

Zhang said he had approached three senior church representatives — Cardinal Fernando Filoni, Archbishop Eugene Nugent and Archbishop Ante Jozic — in Hong Kong in the past and all of them told him to take care of his ministry. “I have never committed malfeasance," he said.

According to Anthony Lam Sui-ki, a senior researcher of the Hong Kong Diocese's Holy Spirit Study Centre, the papal privilege allowed bishops in China to perform episcopal ordination first without Vatican permission and then report to the pope afterwards.

Lam said the privilege was given by Pope St. John Paul II because he supported Bishop Peter Joseph Fan Xueyan of Baoding in Hebei in ordaining bishops secretly during persecution under the Chinese Communist Party (CCP).

However, Pope Benedict XVI revoked this privilege in a letter to the China Church in 2007.

Zhang claimed some faithful had asked him to ordain seminarians to become deacons, priests or even bishops in the past few years but he had rejected them all.

“But when I look right now, my refusal may be a sin because God wants to bring new blood to the Church. How can I stop the Church from growing?” Zhang asked.

Zhang said several priests had told him he has a right as a bishop to ordain clergy because the Vatican-China provisional agreement on the appointment of bishops last September had betrayed the faith.

“It makes the Church in China more complicated. For the faithful, the Church can continue. I cannot reject [ordinations] anymore,“ Zhang added.

Underground priest Father John, who is a candidate for ordination, disagrees with the plan because “we cannot use a wrong thing to cover another wrong thing.”

“Even though some believe Pope Francis betrayed us, this is not like the era of Bishop Peter Joseph Fan. We still have priests,” Father John told ucanews.com. “We cannot mix up the doctrine, otherwise we will be like the Patriotic Association [a CCP-controlled body].”

Underground Catholic Paul also opposes Zhang’s plan, saying the papal privilege has been revoked. He told ucanews.com that self-ordination will cause the underground church trouble.

“The government will not tolerate the underground Church ordaining bishop by itself. It will make the Church vulnerable to greater persecution,” Paul said.

The day after the China-Vatican agreement on bishop appointments, Pope Francis announced that he had pardoned eight illicit bishops from the CCP-controlled open Church.

China has 5-6 secretly ordained bishops. The most famous one in recent years is Father Paul Dong Guanhwa, who was detained by the CPP because he performed a bishop’s ordination in 2016.