Seeking checks and balances in Malaysia

After allowing a tilt towards extremism, readjustment proves difficult A Malaysian man wearing a traditional Muslim skullcap printed with the national colors leaves after offering prayers at a mosque in Kuala Lumpur in this file photo. Debate over the approval of an amendment to an Islamic law has been put on hold in the Malaysian parliament until July.  (Photo by Manan Vatsyayana/AFP)

Over the past week, Malaysia’s coalition government went through several contortions in parliament to avoid shooting themselves in the foot as they prepare for general elections due in the second half of next year.

The confusion surrounding approving an amendment to an Islamic law — that would allow harsher punishments — continues despite Prime Minister Najib Razak distancing his government from the bill last week reversing earlier support for the Pan Islamic Party of Malaysia (PAS) plan.

It now seems it, along with several other issues that will impact on minorities in the country, has merely been kicked down the road to the next parliamentary sitting in July.

This was evident when the month-long opening session of parliament ended April 6 when PAS leader Hadi Awang managed to table his motion to amend the Shariah Courts (Criminal Jurisdiction) Act (Act 355) amid protests by the opposition.

PAS secretary-general, Takiyuddin Hassan, in a speech supporting the amendment to the bill, said it had nothing to do with non-Muslims and they should not interfere.

All talk of further debate however fizzled out when speaker Pandikar Amin Mulia brought the first parliament sitting of the year to an early end on the evening of April 6. Debate of the bill, he said, would have to wait till the next sitting in July.

Earlier this week, the government courted more controversy when it passed a law to protect those under the age of 18 from pedophiles but failed to address the fact that a large proportion of child rapists escape punishment by marrying their victims.

The bill also does not reconcile present laws that set the minimum age for marriage at 16 while the Sexual Offences Against Children Bill 2017 defines those below 18 as children. 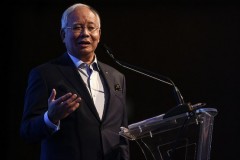 Aljazeera reported last year that Sharmila Sekaran, the chairperson of Voice of the Children, as stating that rapists were marrying their victims as young as 14 years of age, or offering financial compensation to the families of their victims as a bid to escape prosecution.

Meanwhile, the eagerly awaited legislative amendments to the Law Reform (Marriage and Divorce) Act 1976 was shelved "to ensure the amendments will not be against Islamic fatwa," deputy prime minister Ahmad Zahid Hamidi told the local media.

The bill sought among others, to resolve problems relating to the unilateral conversion.

First tabled in November last year, the bill seeks to deal with problems arising from divorce and child custody issues after one parent converts to Islam.

Continued pressure over the prolonged custody battles by mothers Indira Gandhi and S. Dheepa, whose ex-husbands converted to Islam and unilaterally converted their children, forced the government to seek ways to resolve the legal conundrum.

Lawmakers had hoped that a new provision would be included that would stipulate that the religion of a child of a civil marriage would maintain the same in the event of a divorce, even if one parent converts to Islam.

This bill drew scorn from several Muslim NGOs as well as outspoken mufti, Harussani Zakaria, who said the bill was unconstitutional and an insult to Islam. Harussani added that the bill also conflicted with a 2009 fatwa that stated children would automatically become Muslim converts if either parent embraced Islam.

Indira's case still reverberates uncomfortably among Malaysians. Now separated almost a decade from one of her children, Indira wonders if the legal battle regarding the religion of her children will ever be resolved.

Her custody battle has made headlines since April 2009 and she was at parliament on April 6 expecting justice. She was disappointed.

"I have been waiting for eight years. Assurance after assurance were made and I was happy when it came to parliament. When can I move on with my life? How many more years do I have to wait?" she said when meeting the press in the parliament media room.