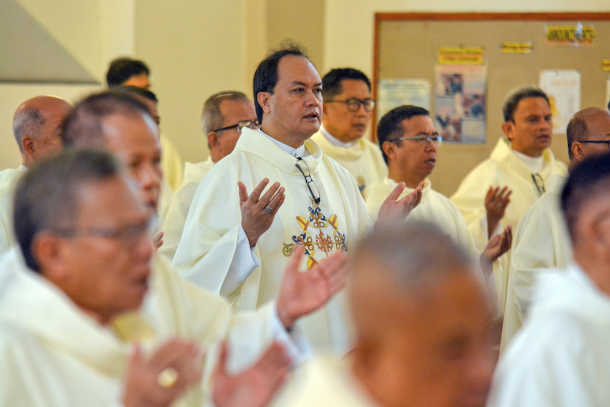 Bishop Pablo Virgilio David of Kalookan in the Philippines is among four bishops charged with inciting sedition, cyber libel, libel and obstruction of justice. (Photo by Roy Lagarde)

Philippine authorities have filed charges of inciting sedition, cyber libel, libel and obstruction of justice against four Catholic bishops, three priests, a religious brother, the country's vice president and 35 members of the opposition.

The charges stem from the release of a video that went viral on several social media platforms early this year that linked President Rodrigo Duterte and his family to the illegal drug trade. A certain Peter Joemel Advincula claimed on a video and in a media briefing early this year that Duterte’s son, Paolo Duterte, and presidential aide Bong Go were involved in drug syndicates.

Weeks later, however, he was presented at a press conference by the Philippine National Police where he claimed Vice President Leni Robredo, opposition members and several church people were behind a plot against the president. The complaint of obstruction of justice, which was filed, was supposedly based on information about a meeting between Advincula and the accused "despite them being clearly aware of Mr. Advincula being a fugitive from the law." Among those charged were Bishop Honesto Ongtioco of Cubao, Bishop Pablo Virgilio David of Kalookan, retired prelate Teodoro Bacani Jr., and Archbishop Socrates Villegas of Lingayen-Dagupan. Also accused of the same charges were former education secretary Brother Armin Luistro, Divine Word priest Flaviano Villanueva, Jesuit priest Albert Alejo and Father Robert Reyes.

Bishop Ongtioco said he was surprised that his name was included in the complaint, saying he had no idea why he was included on the list. "I am and will always be a person of peace," he said.

Bishop David said the charges being leveled against the religious leaders are not only unjust but atrocious.

"They are based on nothing but false testimony. What motivates the supposed witness to give false testimonies is what in fact [the police] should be investigating," he said.

"The intention is obvious: pure harassment and an effort on the part of the police to do not their sworn duty but what they think will be pleasing to the higher authorities.

"They are in effect doing a disservice, dishonor and an injustice to their own institution and to the few remaining people of integrity among their fellow officers in uniform."

Bishop Bacani, retired prelate of Novaliches Diocese, rejected the charges against him.

"That shows how stupid the police are. They are easily fooled. The witness is completely unbelievable," said the prelate, adding that the police will "look stupid before the world if they file the charges."

"Maybe the administration wants to hide something from the people," he said. Philippine Justice Secretary Menardo Guevarra said he will form a panel of state prosecutors to hear the complaint and conduct a preliminary investigation. The complaint filed by the police Criminal Investigation and Detection Group said the accused spread "lies" against the president, his family and close associates, "making them appear as illegal drug trade protectors and how they earned staggering amounts of money." The complaint alleged that the crimes of inciting sedition, libel and obstruction of justice were committed inside Jesuit-run Ateneo de Manila University "wherein they planned to spread false information" against the president's family and administration officials. It said the accused aimed to "agitate the general population into staging mass protests with the possibility of bringing down the president." Opposition senator Francis Pangilinan of the Liberal Party said the complaint smacked of "political harassment and persecution." The other accused are mostly staff members of the Liberal Party, lawyer Theodore Te of the Free Legal Assistance Group, and officials of the Integrated Bar of the Philippines. The presidential palace distanced itself from the charges filed by the police. "We have nothing to do with this case. Not at all," said Salvador Panelo, Duterte's spokesman. "It's difficult nowadays for us to speak against the government," said Sister Marilyn Ubaldo of the Religious of the Virgin Mary when asked about her reaction to the filing of charges. The nun said the filing of the case "is more of a reminder" about what the bishops are really doing. "I hope there will be a dialogue for clarification," said the nun.

Father Dante Funelas of the Congregation of the Blessed Sacrament said the allegations against the bishops and the priests were "unbelievable."

"If you're critical about the government, especially on the issue of human rights, is that sedition? It’s part of the work of the Church," he said.

The priest said if church people do not say anything about social ills, they would be committing a "sin of omission." Marielle Lucenio contributed to this report.