Security up in Cebu for feast of Child Jesus

Police told to ensure safety for up to 2 million visitors 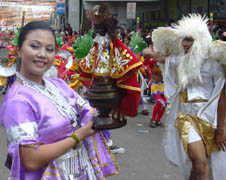 Authorities are beefing up security in the central Philippine province of Cebu for the annual “Sinulog” festival in honor of the Santo Nino or the Child Jesus. The festival, which will culminate on Jan. 16, is one of the country’s main tourist attractions. Local authorities today ordered police to implement measures to ensure the safety of two million visitors expected to attend the festivities that will include a street parade. The Sinulog is a dance ritual in honor of the supposedly miraculous image of the Santo Niño. The dance, which has a pagan origin, is said to be the link between the country’s pagan past and its Christian present. Meanwhile, Cebuanos are also busy preparing for the installation of their new archbishop, Jose Palma, at the Cebu Metropolitan Cathedral on Jan. 13. Archbishop Palma will become the 24th prelate to administer the ecclesial province of Cebu since 1595, when Augustinian Friar Pedro de Agurto was appointed the first bishop. Archbishop Palma’s predecessor, Ricardo Cardinal Vidal, will preside over the 9 am Mass and hand over responsibilities with Auxiliary Bishops Julito Cortes and Emilio Bataclan. Manila Archbishop Gaudencio Cardinal Rosales and Papal Nuncio Archbishop Edward Joseph Adams are expected to attend the ceremonies. Archbishop Palma, 60, was born on March 19, 1950, in Dingle, Iloilo and was ordained a priest in 1976. His episcopal ordination took place in Jan. 1998. He was appointed Bishop of Calbayog in January 1999 and installed the following March. He was later appointed Archbishop of Palo in March, 2006 and installed in May of that year. In July, 2009, he was elected vice president of the Catholic bishops’ conference. Related reports Cherished Filipino festival brings English town to standstill Santo Nino pilgrims pledge Haiti aid PR12732.1635