People gather beside a burning Indian flag to show solidarity with Kashmiri people during a rally in Muzaffarabad, the capital of Pakistan-administered Kashmir, on Aug. 5. (Photo: AFP)

Hundreds of extra police and troops were deployed in the main city of Indian-administered Kashmir on Aug. 5 as separatist groups called for a shutdown to mark a "black day" on the second anniversary of New Delhi imposing direct rule.

Kashmir has been divided between India and Pakistan since the end of British colonial rule in 1947 with both claiming the territory in full. Fighting in the Indian-controlled part has left tens of thousands, mostly civilians, dead.

Ahead of the second anniversary, security forces erected numerous new checkpoints and barricades across Srinagar with personnel in bulletproof gear checking vehicles and frisking residents on the roads.

Suspected rebels fired at a police patrol in the Sopore area, but no one was injured, a police officer told AFP. However, district police refuted the incident on Twitter.

The call was supported by several smaller separatist groups who also challenge India's rule of Kashmir.

Police initially termed the Twitter handle and statement as "fake". But the ailing Geelani, under house arrest for most of the last 13 years, issued his first video in two years on Aug. 4, confirming the statement via his "nominated special representative".

Most shops remained closed in Srinagar on Aug. 5 and vehicular movement on the roads was thin. However, police were seen asking shopkeepers to open.

Many shopkeepers and businessmen, without wishing to be named, told AFP that police had threatened them. Local reporters said officers were breaking locks on shutters. 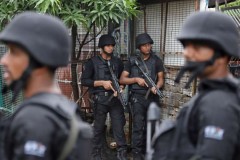 "I was recording video of shuttered shops when police officers arrived and took my photos while I was working and accused myself and journalists of instigating a shutdown," photojournalist Umer Asif told AFP.

Former Kashmir chief minister Mehbooba Mufti, along with dozens of other local politicians, spent months incarcerated after being arrested in the 2019 clampdown.

Scores of people remain behind bars either in Kashmir or elsewhere, held under controversial legislation that allows them to be detained for up to two years without charge.

"When unbridled oppression is unleashed and gross injustice heaped, there is no other choice but to resist to exist," she tweeted.