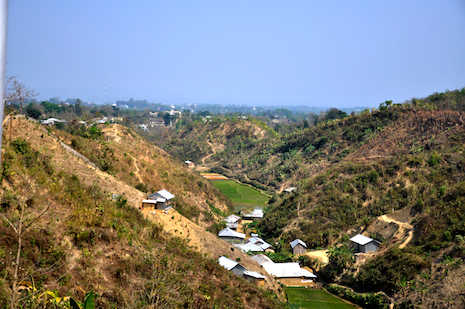 A view of the Chittagong Hill Tracts (Credit: ucanews.com)

Police and army personnel have been deployed at Rangamati hill district in southeastern Bangladesh since Tuesday after an attack on ethnic minority Chakma villagers, allegedly by majority Bengali settlers, which left dozens of houses and properties vandalized and burned down, officials said.

The attack on Tuesday morning at three tribal villages in Naniarchar sub-district occurred after vandals ravaged a pineapple plantation owned by Bengali men the previous night.

“The attackers came in three jeeps early in the morning and vandalized our homes for more than an hour. Last night, we stayed under the open sky in a makeshift camp,” said Banter Chakma, 60, a tribal Chakma villager.

“The government gave us some money, but we need more and also some tin to make new homes,” he added.

Mission Chakma, 55, estimated that 60 homes of tribal people and a temple were destroyed in the attack.

“The attackers vandalized and set ablaze homes and also a temple. They also looted valuables including some Buddha statues worth 2-2.5 million Taka (US$26,000-$32,000),” he said, “We want the culprits to be arrested and punished.”

Deputy Commissioner Mostafa Kamal, the chief government officer in Rangamati, termed the incidents “shocking,” though he denied that a temple had been attacked.

“We don’t know yet who are behind these incidents. Bengali people and tribal people are blaming it on each other, but we need time to figure it out and catch the culprits,” he said.

Kamal added that two probe committees have been formed to investigate the attacks and the police have been ordered to file cases.

He added that aid worth 235,000 taka, some tins and blankets have been distributed, and more will be given after the probe is concluded.

Amena Begum, Rangamati police chief, said the situation is calm now and the police will conduct raids to arrest the culprits once cases are filed.

“Police are patrolling the area while the army has been deployed in the main road. Today, complainants are going to file cases and we will move out to catch the culprits,” she said.

Rangamati, one of the three districts covered by the Chittagong Hill Tracts (CHT) bordering India and Myanmar, is the only mountainous region of Bangladesh. The CHT is home to more than 12 indigenous tribes, mostly Buddhist, who have lived there for centuries but long been socially and economically neglected by the government.

The ethnic minorities have seen the systematic destruction of their culture and livelihood since the 1970s when the government started changing the local demography by resettling landless Bengali Muslims who started grabbing tribal lands. The result has been ongoing sectarian conflict in these hills.

Tribal communities resisted the influx and, with latent support from India, formed a militia group to fight the settlers. In response, the government turned the area into a military zone.

For more than two decades, a bloody bush-war between the army and militants claimed hundreds of lives until it ended with the CHT Peace Accord in 1997, which is still to be implemented. To this day, the region is heavily militarized with some 500 army camps.