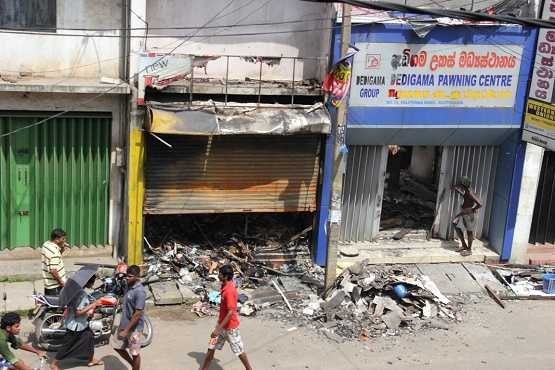 Extremist Buddhists attacked Muslims and set fire to their properties and vehicles in Aluthgama in 2014. (ucanews.com photo)

Despite the war between the majority Sinhalese and minority Tamil dying down in 2009, embers of sectarian and religious conflict remain, according to rights activists and church officials.

There are a number of groups who promote poisonous ideologies via poster campaigns, hate speeches and online, according to local media. It has flared up in several high profile incidents. The chief Buddhist monk of the Mangalaramaya temple verbally abused a Tamil government official in front of a police officer but no action was taken, according to a video released on Nov.12.

Buddhism is the official religion in Sri Lanka and monks are revered, sometimes, as in this case, to the detriment of the rule of law. Indeed, 70 percent of the population are Buddhists. In another incident, police arrested Abdul Razik, secretary of the hard-line Muslim organization, Thawheed Jamath on Nov. 16 on charges of inciting religious disharmony. He gave a speech slamming other faiths during a protest on Nov. 3. Father Reid Shelton Fernando, coordinator of the Young Christian Workers Movement of Colombo Archdiocese, said that the government should safeguard the rights and freedom of all minorities. "In recent years, some extremist elements have carried out a vilifying campaign in favor of nationalism. There was a video circulated on social media by a Buddhist monk who spoke against a government official claiming that he should be killed," said Father Fernando. Venerable Ampitiye Sumanaratne Thero, a Buddhist monk,  lashed out against the official using racially-charged language when he sought to act against land encroachment, allegedly by Sinhalese residents. According to reports from the area, the monk had also been preventing the police from evicting the encroachers.   "There were police in the vicinity and they were afraid to take steps because of a recent incident in the north when policemen were arrested," he said. Prime Minister Ranil Wickremsinghe urged the police to take action against extremists on Nov. 20 and said that everyone had the right to take pride in their race and religion. His words came in a charged situation. Sinhalese Buddhists attacked Muslims and set fire to their property and vehicles in Dharga Town in 2014. The riots killed four Muslims and injured over 80 and displaced some 10,000 residents. "Hate speeches and such activities create religious and ethnic hatred and disharmony among communities who live peacefully," said Nihal Somasiri, a rights activist who works for inter-religious harmony. "There were hundreds of extremist activities under the former regime but the unfortunate thing is all these activities have reappeared under new government too," he added. The Muslim Council of Sri Lanka said that the Muslim community is alarmed about the ongoing racist campaign carried out by extremist Buddhist monks. They said that young people have started social media campaigns against the Muslim community. "Muslims have a long history of peaceful co-existence," the Muslim Council of Sri Lanka said in a statement. Some 10,000 Muslims were displaced after the riots in Aluthgama in 2014. (ucanews.com photo)