Third Christian suspect on the run 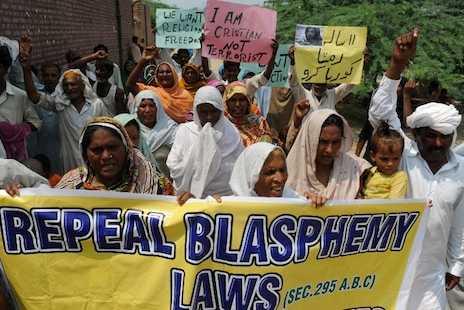 In this file photo from 2102, Christians protest against the blasphemy laws (picture: AFP/Arif Ali)

A second Christian man has been arrested and accused of abusing Islam in Lahore as a third suspect remained on the run, police said, in a landmark case under Pakistan’s controversial blasphemy laws.

Irfan Masih, a worker at a Christian glass shop in the Punjabi capital, was arrested on Sunday five days after shop owner Mushtaq Masih was detained, police officer Mian Azeem said on Tuesday.

“Adnan [Masih], the prime suspect, is still on the run,” he added.

Brothers Adnan and Irfan along with shop owner Mushtaq are the first Pakistanis to face charges under all three sections of Pakistan’s strict blasphemy laws simultaneously and could face the death penalty, said Adnan Gill, coordinator of the National Commission for Justice and Peace founded by the Pakistani Catholic Bishops’ Conference.

Following accusations that they wrote abusive words about Islam and the Prophet Mohammed in a book written by a Muslim cleric, they will face charges under the penal code which forbids outraging religious beliefs, defiling the Qu’ran and defaming the prophet.

“It is unfair to lodge the case under section 295B, which is about defiling the Qu’ran,” said Adnan, explaining that the men are accused of writing in a religious text and not in the Islamic holy book itself.

The complainant is a member of Jamaat-ud-Dawa (JUD), a charity organization which the United Nations Security Council in 2008 declared a front for the terrorist organization Lashkar-e-Taiba (LET). JUD has denied any terrorist links.

The blasphemy case marks the latest in a series in Pakistan which have sparked controversy in the West and among Christians.

Rimsha Masih, a 14-year-old Christian girl, was held in a maximum security prison for weeks in August last year before she was cleared of desecrating the Qu’ran in November.

Meanwhile, Asia Bibi, a Christian mother of four, has been imprisoned for the past four years after she was found guilty of drinking water from a cup that was reserved for Muslim women.

More than 1,000 blasphemy cases have been filed in Pakistan since 1988, according to the Human Rights Commission of Pakistan.