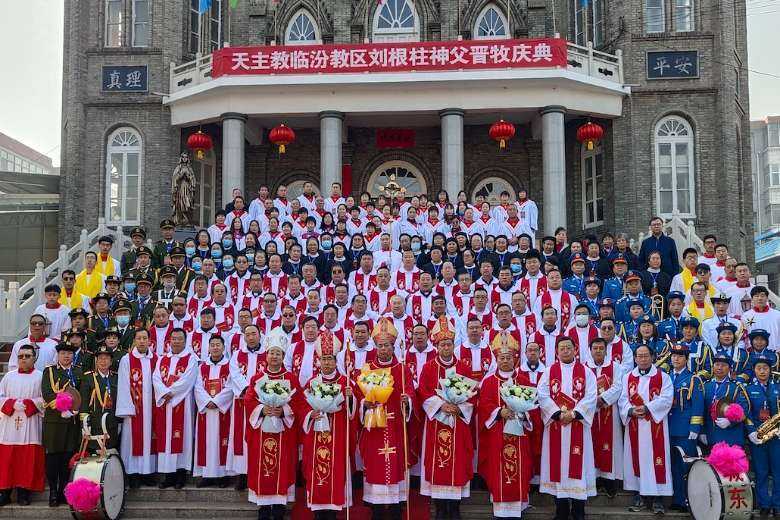 The ordination of Father Peter Liu Genzhu as bishop of Hongdong (Linfen) on Dec. 22. (Photo: chinacatholic.cn)

A bishop has been ordained in China with the approval of both the country’s communist regime and the Vatican in the second such ceremony since an agreement between the two was renewed in October.

The ordination came just a month after Bishop Thomas Chen Tianhao of Qingdao, Shandong, was ordained on Nov. 23, the first ordination with the approval of the Holy See and the Chinese government under the provisional agreement.

The Vatican and China signed an agreement on bishops’ appointments in September 2018 for two years and it was renewed in October. The details of the agreement have not been published.

The episcopal ordinations were considered the authentic fruits of the agreement, according to a source from the Holy See.

Candidates went through the process of episcopal election from the local Church and the selections were recognized by Chinese authorities and approved and appointed by Pope Francis, the source told UCA News on Dec. 23.

The system is expected to become the normal practice of bishop appointments in China.

Under the provisional agreement, the election result is communicated to the Holy See and only after an investigation can the decision be approved and an appointment made by the pope.

The papal appointment of Bishop Liu was confirmed in November, a month after the renewal of the Vatican-China provisional agreement on Oct. 22.

The controversial provisional agreement, which has been renewed for another two years, aims to end China's communist government directly appointing Catholic bishops without papal recognition.

The ordination of 54-year-old Bishop Liu was held at the Catholic church in Hongdong County Square, according to the official website of the state-approved Bishops’ Conference of the Catholic Church in China (BCCCC) and the Chinese Catholic Patriotic Association (CCPA).

The consecration was presided by Bishop Paul Meng Ningyou of Taiyuan, deputy director of the provincial CCPA. Other concelebrants included Bishop Wu Junwei of Yuncheng, Bishop Ding Lingbin of Changzhi and Bishop Ma Cunguo of Shuozhou.

At the ceremony, Father Yang Yu, deputy secretary general of the Council of Chinese Bishops, announced the mandate of Bishop Liu on behalf of the BCCCC in an approval letter dated Dec. 16 in which papal approval of the candidate was noted.

About 63 priests joined the celebration along with 200 seminarians, nuns and Catholics from dioceses across the province.

Born in 1966 in Hongdong, Bishop Liu graduated from the Shaanxi Catholic Theological and Philosophical Seminary in Xian in 1991 and was ordained a priest in the same year. He was appointed vicar general of Lifen Diocese in 2010 and was a deputy director of the provincial CCPA.