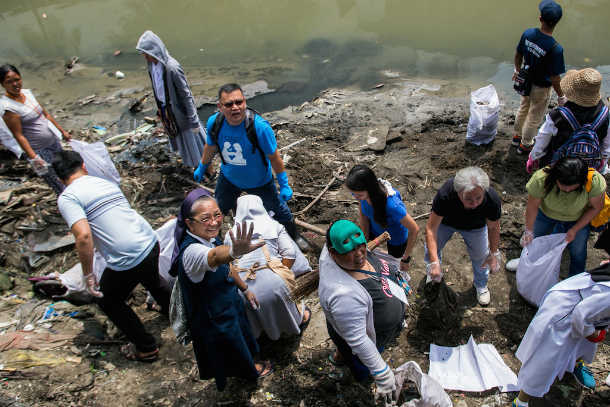 Priests, nuns, and lay church workers conduct a river cleanup activity in a suburb of Manila to mark the end of the observance of the Season of Creation on Oct. 5. (Photo by Mark Saludes/ucanews.com)

Filipino Catholics in Manila marked the end of this year's Season of Creation celebration with a river cleanup activity on Oct. 5 to dramatize what they described as the "urgent need to address the problem of pollution."

The influential Association of Major Religious Superiors in the Philippines led the environmental action to encourage Filipinos to act on "reviving and saving our rivers."

Franciscan priest Angelo Cortez said the country's rivers "gave birth to many cultures and civilizations" but have been ignored.

"The rivers and waters are now forgotten, insignificant, and have become enormous receptacles for industrial waste and human garbage," said the priest.

He appealed to Filipinos to help lobby for the passage of a bill that would declare rivers as "living entities."

The Philippines has 421 principal river basins in 199 watersheds.

In 2016, Water Environment Partnership Asia reported that the effect of water pollution costs the Philippines about US$1.3 billion a year.

Government data shows that at least 58 percent of the country's groundwater has been contaminated and can cause serious illnesses.

Meanwhile, Greenpeace has reported that at least 50 former key rivers in the country are now considered "dead."

To address this, church groups earlier this year pressed for the enactment of a law that would recognize the "rights of the environment."

Yolanda Esguerra, coordinator of the church-based group Philippine Misereor Partnership Inc., said human activities and development should not interfere with the ability of nature to regenerate.

She said a pending bill in Congress aims to "provide a path for people to re-learn respect for Mother Earth."

Manila Auxiliary Bishop Broderick Pabillo, however, said that, "with or without a law, care for the environment is a daily duty that every person must perform."

The prelate described the Season of Creation as "a lifetime obligation of every Christian to the world."

Catholics from all corners of the world observed the event — a global movement in response to Pope Francis' 2015 encyclical on the environment, Laudato Si' — from Sept. 1 to Oct. 4.