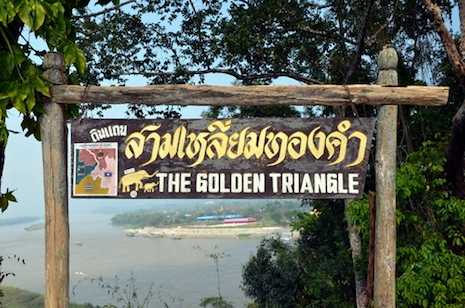 New report says opium production in the region known as the Golden Triangle has doubled in 10 years. (Picture: Shutterstock)

Cultivation of opium in Southeast Asia’s notorious Golden Triangle region has doubled in the past decade, according to an in-depth study that rebuffs claims by governments that an aggressive anti-narcotics policy is reaping benefits and improving livelihoods.

The findings come a year before the 2015 deadline set by the Association of Southeast Asian Nations (ASEAN) bloc to make the region drugs free. Myanmar, the world’s second highest opium producer after Afghanistan, remains the driving force. According to research by the Transnational Institute (TNI), nearly 60,000 hectares of land were used for opium cultivation in 2013, producing 870 tonnes of the substance, compared to just over 20,000 hectares in 2006.

Martin Jelsma, co-author of TNI’s report, ‘Bouncing Back – Relapse in the Golden Triangle’, offered a stark warning to those still pushing for heavy handed treatment of users and poorly planned crop substitution programs.

“Instead of holding on to the illusion of a drug free ASEAN, policies and resources should be redirected towards managing the drugs market in the least harmful way, because whether we like it or not, that market is here to stay,” he said in a statement.

The strict 2015 deadline for a drugs-free Southeast Asia, driven in part by pressure from western nations, may have worsened the problem. Law enforcement officials, particularly in Thailand, Myanmar and Laos, have taken a heavy-handed approach to both low-rung mules and users, with teenage addicts known to have been locked up in poorly maintained rehabilitation centers that receive meager funding, and where abuse is rife.

In February this year, the UN came under fire from a coalition of rights groups, who said that UN-funded anti-drugs campaigns in Vietnam had included the death penalty for drug-related offenses. Vietnam has around 700 people on death row, many on drugs charges. TNI said that the UN drugs agency’s “monopoly of truth” meant that its statistics on drug production across the region were often taken as gospel, despite them being largely based on guesstimates – and therefore often conservative – rather than reliable scientific data.

The majority of the region’s drugs, both opium and methamphetamine, flow into Laos, China and Thailand from northeastern Myanmar’s Shan State. Japan and Australia are also consumers of Shan heroin. The mountainous state has long hosted rival drug militias and armies who cultivate poppies in fields nestled alongside legal crop plantations. Factories hidden deep with forests also churn out millions of amphetamine tablets each year, which find a keen market in Thailand.

For many of Shan State’s poor farmers, production of opium is the only reliable source of income. Crop substitution programs, designed by both the Myanmar government and the Chinese, which is becoming increasingly alarmed at the movement of drugs across its borders, have been a resounding failure, and in many cases driven farmers deeper into poverty.

“The current Chinese opium substitution programs in Burma [Myanmar] and Laos have further marginalised vulnerable communities by pushing them off their lands to make way for large-scale agricultural concessions controlled by Chinese entrepreneurs and local authorities,” the report says.

Anthony Davis, an expert on the Southeast Asian drugs market and an analyst with Janes Defence Weekly, says official complicity by the Myanmar military has been a key facilitator in the trade. “My sense is that there’s certainly involvement of army personnel, possibly up to battalion commanders in places where local militias are actively involved in the market,” he says.

The report goes one step further, saying that too heavy a focus on drug kingpins and militias had ignored the fact that the market is greased by “illegal transactions that come dangerously close to the higher echelons of power in the region”.

The Myanmar government, which has historically been known to have a hand in the industry, has negotiated ceasefires with a number of armed ethnic groups known to be key players in the drugs trade. Davis says however that rather than bringing law and order to the border regions, the ceasefires have permitted space in which greater drug production can be carried out.

“These temporary ceasefires have been ordered at the end of a rifle barrel, resulting in a situation whereby certain forces are ramping up production of drugs in order to make money and prepare for conflict.”

The TNI warned that the industry has become increasingly regionalized, “with opium cultivation in Northeast India linked to Burmese markets, India and China producing precursors for heroin and ATS [amphetamine-type stimulants] for Burma and Thailand, and the Golden Triangle producing heroin for the Chinese market”.

The spread has been a direct result of government focusing on punishing users and aggressively eradicating drugs, rather than making earnest attempts at alleviating poverty and other root causes of production.