Students in the Tuen Mun district of Hong Kong hold a sign reading 'Hong Kong police knowingly breach the law' as they take part in a school human chain rally on Sept. 5. Millions of people have taken to Hong Kong's streets since June in the biggest challenge to China's rule of semi-autonomous Hong Kong since its handover from the British in 1997. (Photo by Philip Fong/AFP)

Catholic officials and pro-democracy activists have described Hong Kong leader Carrie Lam’s withdrawal of a controversial extradition bill as “too little, too late.”

Lam, chief executive of the Chinese territory, announced on Sept. 4 that she will scrap the bill that sparked months of mass protests.

The proposal, introduced in April, would have allowed criminal suspects to be extradited to mainland China. The bill was suspended in June but Lam stopped short of scrapping it.

Jackie Hung, project officer of the Justice and Peace Commission of Hong Kong Diocese, told ucanews.com on Sept. 5 that the bill’s withdrawal had come too late and seemed meaningless.

Aside from withdrawal of the bill, protesters had also demanded an independent probe into the use of force by police, an amnesty for arrested protesters, a halt to categorizing the protests as riots, and the implementation of universal suffrage.

Hung said Lam had not accepted the five key demands. “It's not acceptable. An independent inquiry outside the government's jurisdiction is necessary to settle the disputes. Through peaceful and rational means, we will continue to fight for universal suffrage,” she said. Students and alumni of high schools in the Tuen Mun district of Hong Kong take part in a joint school human chain rally supporting the pro-democracy movement in the Chinese city on Sept. 5. (Photo by Philip Fong/AFP) 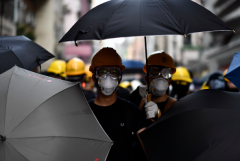 Edwin Chow, acting president of the Hong Kong Federation of Catholic Students, believes that Lam suddenly withdrew the bill to try to calm the situation before National Day on Oct. 1.

“The government wrongly predicted that after schools started the new term, there would be less action by students, but that is not the case,” Chow told ucanews.com.

Chow said he accepts the bill’s withdrawal but does not agree it is a victory for protesters. “We have made five key demands, not one. I believe the movement will go on,” he said.

He doubts whether the Independent Police Complaints Council (IPCC) can help to solve the conflict and called for an independent investigation into allegations of police brutality.

“Under the present IPCC, it is difficult the monitor the police and there are many pro-government members on the committee — a serious bias,” he said.

Rights group Hong Kong Watch welcomed the bill’s withdrawal but said it is "far too little, far too late.”

“Police brutality and arbitrary arrests of peaceful demonstrators have reached a severe and shocking level, leading to increasing concerns that Hong Kong is in grave danger of becoming a police state,” it said.

“This has led some critics of the Hong Kong government to suggest that an extradition bill has become unnecessary because the police are carrying out the Chinese Communist Party regime's campaign of repression on its behalf.”

Hong Kong Watch is urging the government to announce a full, immediate and independent inquiry into police brutality with enforcement powers for dismissal and prosecution of those officers who used disproportionate force.

It also called for the immediate release of peaceful protesters and democratic political reforms including full universal suffrage for Legislative Council seats and the chief executive’s election.

Benedict Rogers, co-founder and chairman of Hong Kong Watch, called on the international community, particularly the British government, to act urgently to resolve the crisis and defend Hong Kong's freedoms and human rights.

"The incredible courage and determination of Hong Kong people to fight for their rights and freedom has been witnessed by the world and inspired us all,” he said.

“Hong Kong is now the new frontline in the battle between freedom and tyranny, and Hong Kong people look to the international community, and especially the United Kingdom, to put pressure on the government of the People's Republic of China to respect Hong Kong's high degree of autonomy promised in the Sino British Joint Declaration, and on the government of Hong Kong to respond constructively to the demands of Hong Kong people.

“Only then can Hong Kong have a chance of healing and moving forward. Britain has a particular legal and moral responsibility to speak out, and we therefore urge the United Kingdom to lead, working with allies to call for these steps to be implemented.” Hong Kong Chief Executive Carrie Lam speaks at a press conference in Hong Kong on Sept. 5, a day after she announced the withdrawal of a loathed extradition bill. (Photo by Philip Fong/AFP)

In a televised address on Sept. 4, Lam announced other measures in an attempt to soothe unrest. She said two senior officials would join an inquiry into police conduct during the protests.

Lam said the protests had "shocked and saddened the Hong Kong people" and the violence was "pushing Hong Kong towards a highly dangerous situation."

"No matter what discontentment the people have towards the government or the society, violence is not the way to resolve problems," she said.

"Currently, stopping the violence is the top priority, maintaining the law and rebuilding the rules of society. The government will sternly tackle violence and illegal action."

Lam said she and other senior officials would visit communities in Hong Kong and talk to people directly about their concerns.

Leading pro-democracy activist Joshua Wong said the bill’s withdrawal would be "too little, too late."

Fellow activist Nathan Law said their campaign would continue. "The movement has evolved into a movement that fights for autonomy, democracy and preserving our way of life and restricting the excessive power of the police," he said.

Amnesty International said that although the withdrawal of the bill was welcome, an independent investigation into "unnecessary and excessive use of force by police" was needed.

Hong Kong was handed back to China in 1997 after more than 150 years of British rule. It has remained semi-autonomous under a "one country, two systems" principle but protesters fear China is seeking greater control.

The extradition bill has been criticized by those who feared it would undermine Hong Kong's legal freedoms and be used to intimidate or silence critics of Beijing.

Hong Kong is now in its 14th successive week of demonstrations, with more violence between police and activists last weekend.