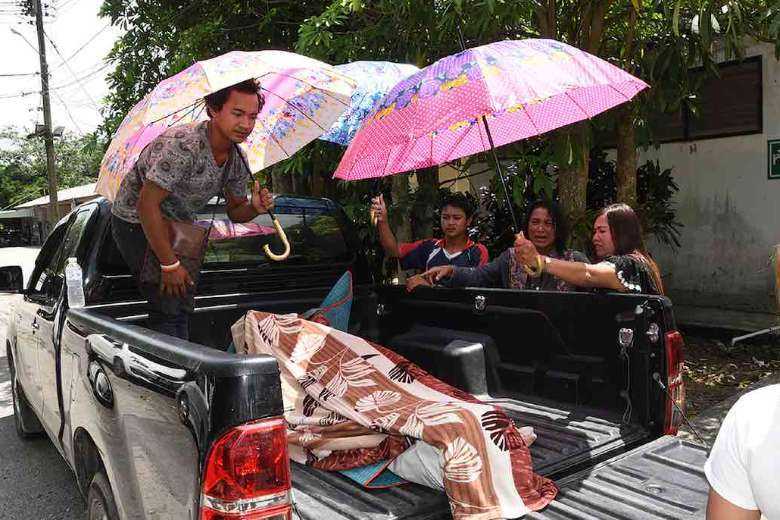 This picture from the DailyNews taken on April 25, 2017 shows family and friends picking up the body of a man, who killed his 11-month-old daughter before committing suicide, at the morgue in Phuket.(Photo: DAILYNEWS / AFP)

The suicide of a child after she was expelled from school for having no money to pay school fees has shocked people in Thailand, a nation experiencing a marked rise in the rate of suicides.

In the widely publicized case, a 14-year-old schoolgirl in the southern province of Phatthalung hanged herself after being expelled by a teacher from school for being unable to pay some fees.

The girl, who had previously complained of her dire financial situation, sent text messages to her friends before taking her own life, saying she wanted her suicide to serve as a warning to her family and teachers, one of her friends revealed.

Reportedly the girl’s mother had been suffering from a gambling addiction, which is common in Thailand, and her absentee father had refused to pay for her studies and living expenses.

“No money, no parents. Stop thinking about coming back to school to meet friends. [I am feeling] despondent,” the girl noted in one of her Facebook posts before her suicide.

Allegedly a teacher reprimanded the girl for missing the first day of school last week and then expelled her when she said she could not afford to pay some fees.

Preechakorn Molika, a member of a local civil network, lashed out at the management of the school for ignoring warning signs about the girl’s mental state.

“Your actions have led to the death of a child,” Preechakorn said. “You need to take responsibility for what happened. It doesn’t matter [how much] the school fees amount to because there are state budgets that can help children like this.”

In another high-profile incident last week, a 31-year-old deliveryman jumped to his death in the Chao Phraya River from a bridge in Bangkok.

The man had been suffering from depression over his precarious financial situation, according to his father.

These suicides are part of a worrying trend of an increasing number of people, young and old, taking their own lives in Thailand over financial and emotional problems, experts say.

The Department of Mental Health has recently warned that suicide-mitigation measures would need to be stepped up in the face of a rising suicide rate in the country where an economic downturn triggered by the Covid-19 pandemic has driven millions of people into destitution.

Based on a new survey by the department, one out of 10 Thais are at risk of developing depression and as many as 5.5 percent of respondents reported having suicidal thoughts.

Alarmingly, a large number of adolescents are at risk of suicidal ideation over their family and financial situations, the department says.

In addition to better mental health provision, strong family bonds are vital for suicide prevention, said Amporn Benjaponpitak, the department’s director-general. “Families can play an important role in helping reduce these issues by providing love and care,” she said.