School returned to Pakistan archdiocese after decades of government control

Institution to be open to 'all children' 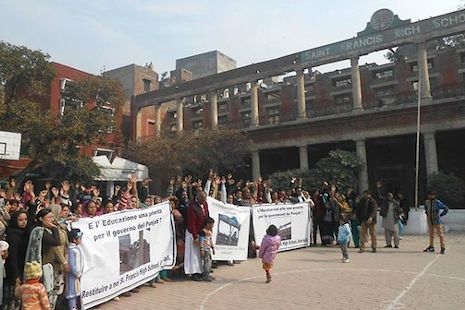 Activists take part in a protest to demand that St Francis High School be returned to the Archdiocese of Lahore from the Pakistani government (Credit: Fr Andrew Nisari)

Catholics in Lahore, the capital of Pakistan's Punjab province, are rejoicing over their government's recent decision to return a more than century-old school to the archdiocese.

“Thanks be to God … as we welcome the government decision in returning back St Francis High School to the Archdiocese of Lahore after 30 long years,” Fr Andrew Nisari, parish priest of Mary Immaculate Church in Lahore's Anarkali neighborhood, said last week.

“Our supporters in this campaign prayed, stood with us in the heat of June, protesting and demanding our school back from the government,” Fr Nisari said.

Fr Nisari added that “all children without any distinction are welcome to benefit from this institution”.

St Francis High School was founded in 1842, but was taken over by the Pakistan government in 1972 as part of president Zulfikar Ali Bhutto's policy of nationalization. Bhutto's policy seized control of all schools, colleges, and hospitals held by Christians in the country.

In 2004, president Pervez Musharraf ordered a conditional privatization of minority educational institutions. As a result, 16 of the Archdiocese of Lahore's schools were returned to its control, with only St Francis remaining as a government-run institution.

Since 2004, the archdiocese had appealed to multiple governmental departments, the courts, and to the United Nations to regain control over the school.

Full Story: Pakistani archdiocese rejoices over return of a school from government