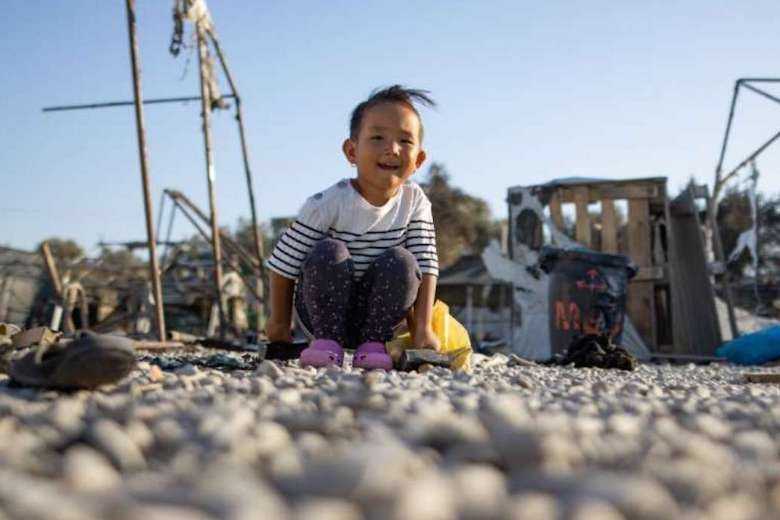 A refugee girl plays in the ashes of a fire camp on the island of Lesbos in Greece. (Photo: AFP)

Visiting Cyprus and Greece in early December, Pope Francis will have several meetings with the countries' Orthodox leaders and with the migrants and refugees their nations host.

While Catholics account for only a small percentage of the Christians in both countries, the pope will hold meetings in both Nicosia and Athens with priests, religious and seminarians and will celebrate public Masses in both cities.

The Vatican on Nov. 13 released the detailed schedule of the pope's Dec. 2-4 visit to Cyprus and Dec. 4-6 visit to Greece, including a return visit to migrants and refugees on the island of Lesbos awaiting resettlement.

Here is the pope's schedule as released by the Vatican. Times listed are local, with Eastern Time in parentheses.

-- 4 p.m. (9 a.m.) Meeting with priests, religious, deacons, catechists and members of church groups and movements at the Maronite Cathedral of Our Lady of Grace in Nicosia. Speech by pope.

-- 5:15 p.m. (10:15 a.m.) Welcoming ceremony at the presidential palace in Nicosia and private meeting with the president.

-- 6 p.m. (11 a.m.) Meeting with government authorities, civic leaders and members of the diplomatic corps in the Ceremonial Hall of the presidential palace. Speech by pope.

8:30 a.m. (1:30 a.m.) Courtesy visit with Archbishop Chrysostomos II of Cyprus at the archbishopric in Nicosia.

-- 9 a.m. (2 a.m.) Meeting with the Orthodox bishops who are members of the Holy Synod at the Orthodox cathedral in Nicosia. Speech by pope.

-- 4 p.m. (9 a.m.) Ecumenical prayer with migrants in the Church of the Holy Cross in Nicosia. Speech by pope.

-- Noon (5 a.m.) Welcome ceremony at the presidential palace in Athens and private meeting with the president.

-- 12:45 p.m. (5:45 a.m.) Meeting with government authorities, civic leaders and the diplomatic corps at the presidential palace. Speech by pope.

-- 4 p.m. (9 a.m.) Courtesy visit to Archbishop Ieronymos II of Athens and all Greece at the archbishopric in Athens.

-- 5:15 p.m. (10:15 a.m.) Meeting with bishops, priests, religious, seminarians and catechists at the Cathedral of St. Dionysius in Athens. Speech by pope.

-- 10:45 a.m. (3:45 a.m.) Visit with the refugees at the government-run Reception and Identification Center in Mytilene. Speech by pope. Recitation of the Angelus prayer.

-- 7 p.m. (noon) Courtesy visit of Archbishop Ieronymos II to the pope in the apostolic nunciature in Athens.