Decades of conflict, racism and rights abuses are fueling Covid vaccine conspiracy theories in the region 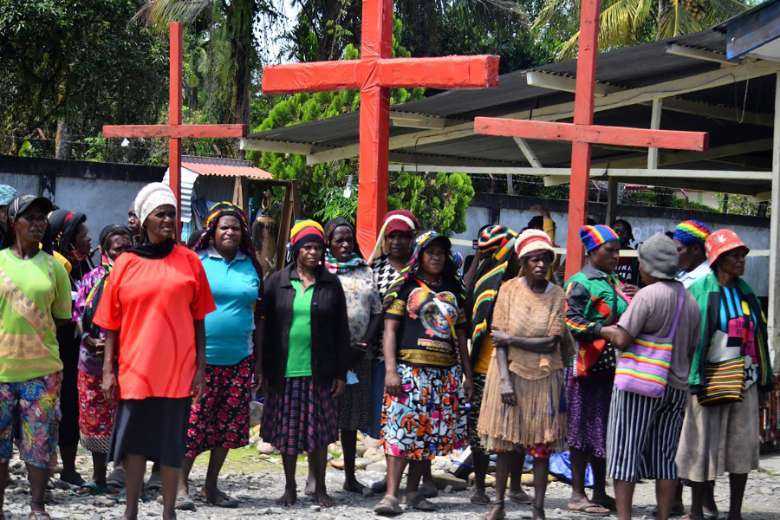 Women protest against the Covid-19 vaccine offered by the Indonesian government in Timika, Papua, on Aug. 10. (Photo: AFP)

"William" is refusing to take a coronavirus vaccine because he fears Indonesia's military will use the country's inoculation programme to poison him and wipe out his fellow Papuans.

Decades of conflict, racism and human rights abuses are fuelling Covid conspiracy theories among his neighbors at a time when their breakaway region is facing a renewed threat from the pandemic.

"I won't take a vaccine if it's brought here by Indonesia," William, who asked not to use his real name, told AFP.

He said he would gladly sign up for any dose administered directly by the World Health Organization.

"But [many people] here are worried that if the jabs come through Indonesia they will be replaced with some other chemical substance that will kill us," he added.

There is no evidence of a genocidal plan by Indonesia, which has drafted the armed forces to help run a nationwide vaccination drive, including in Papua.

But a widespread hatred of the military runs deep in the region, located on the eastern edge of the Southeast Asian archipelago nation and just north of Australia.

Security forces have been accused of committing atrocities against Papuan civilians during decades of fighting between a rebel independence movement and government troops.

Much of this conflict has centred around William's hometown of Timika, near the world's biggest gold mine — a potent symbol for Papuans of the region's exploitation and environmental devastation.

Indonesia, as with many countries, has found its efforts to fight the pandemic hamstrung by both limited vaccine supplies and hesitancy driven by the spread of online disinformation.

The spread of unfounded rumors in Papua mirrors a similar phenomenon across the border in Papua New Guinea, an independent nation with stronger cultural and historical ties to Papua than the rest of Indonesia.

Social media posts there falsely claimed to show evidence of locals being forcibly vaccinated in a mass medical trial, and even suggested that the vaccine campaign as part of a racial genocide plot.

Papua's long history of conflict and mistrust has created a wide audience for fearful rumors.

"The conflict has been going on for so long that ... whatever the central government is doing will appear suspicious," said Adriana Elisabeth, a Papua expert at the Indonesian Institute of Sciences.

Appeals by local activists have done little to lift low vaccination numbers among Papuans, which stand at fewer than 30,000 — less than one percent of the region's population.

Papua has sailed through earlier waves of the pandemic relatively unscathed, with its 40,000 confirmed infections a tiny fraction of Indonesia's total.

But it is now threatened by the highly contagious Delta variant that has wreaked havoc elsewhere in Indonesia and other parts of Southeast Asia, and its underfunded health system is ill-equipped to navigate a crisis.

Authorities have blamed low take-up rates on social media hoaxes and say Papuan church leaders have also stoked doubts over the seriousness of the pandemic and staged mask-burning demonstrations.

"The military is just an excuse," said Aaron Rumainum, head of the illness prevention division at Papua's health agency, adding that it was mostly civilians handling vaccinations.

"But we are not giving up. We'll focus on those who are keen instead of the ones who reject vaccines."

Two years ago, the arrest of young Papuans studying in the city of Surabaya sparked riots that left dozens dead in the remote region

Jakarta took control of Papua in the 1960s after a UN-sponsored vote to incorporate the former Dutch colony into Indonesia — a ballot widely viewed as rigged.

That set off decades of conflict in Papua, where the largely Christian and ethnic Melanesian population shares few cultural ties with the rest of Muslim-majority Indonesia.

Papuans routinely face anti-black discrimination in the rest of the archipelago.

Two years ago, the arrest of young Papuans studying in the city of Surabaya sparked riots that left dozens dead in the remote region.

The region has also been on tenterhooks since rebels assassinated Indonesia's top intelligence chief there in April, prompting a crackdown and the designation of local separatists as "terrorists".

Protests have broken out this month against the vaccination programme and broader anger over Papua's subservient status. Security forces responded by arresting and beating civilians, according to local media reports and rights groups.

The heavy troop presence on the streets was driving rumors that it was meant to limit independence-seeking Papuans' movements rather than reduce infections.

"There are soldiers and police everywhere," said Marcus Dogopia, a resident of provincial capital Jayapura who has also resolved not to seek a Covid vaccine.

"The jabs aren't safe for us. When you get vaccinated you'll become weak and won't be able to move around," he added.