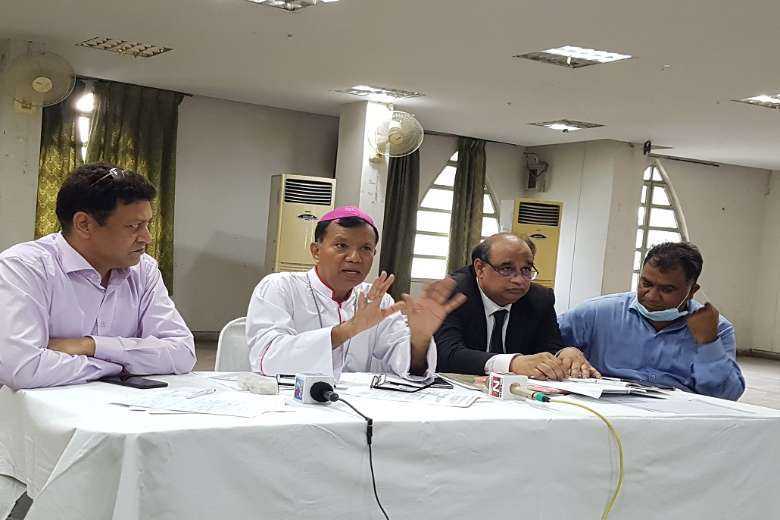 Archbishop Sebastian Shaw of Lahore (second from left) speaks at the consultation on minority properties at Caritas Pakistan in Lahore on July 23. (Photo: Kamran Chaudhry)

In 2017, a Pakistani orphanage run by the Salvation Army was shut down due to funding constraints. The building, occupying 4,046 square meters, was sold for 240 million rupees (US$1.49 million) this month.

“We obtained the no-objection certificate (NOC) from a commission in Islamabad. We were helpless,” Captain Saber Anees, property officer of the Salvation Army, told UCA News.

“Ultimately our territorial commander in UK and the local chief secretary signed the agreement in 2019 to sell the hostel. Our leadership has several plans, including building a seminary, to use the money.”

“All special and common people are informed that our respected client had a joint venture with Lahore Church Council of United Church in Pakistan for construction and development work on a 1,391 square meter property,” it stated.

“If any person or organization has any claim, immunity or argument on the mentioned plot, they should inform me via courier service on phone in seven days. No right or claim will be accepted after the limitation.”

At least 30 properties have been sold with forged documents. Due to public opposition, the mainstream churches are not heard on this issue

For years Christian activists have been protesting against the disposal of church properties, demanding arrest of their facilitators and condemning the land mafia. They blame board members for protecting the corruption of their relatives and selling the missionary properties.

In 2018, local media reported the scandal of a Presbyterian church in Faisalabad, occupying 5,564 square meters, sold for 40 million rupees ($248,000). Jang newspaper of Lahore accused “an organized Islamabad based group” of selling church properties in different cities including Murree and Islamabad.

The house of God became the talk of the town last month after an amendment sought to shift authorization of the sale, transfer, purchase and gifting of properties belonging to minorities from the federal government to the “ministry concerned,” supposedly the Federal Ministry of Religious Affairs and Interfaith Harmony.

As per law, the recommendation process involves the National Minorities Commission for this authorization. The National Assembly’s standing committee on religious affairs and interfaith harmony has approved the bill. Punjab province operates under this federal law on minority properties.

Churches in three other provinces require an NOC from provincial ministries of minorities affairs and interfaith harmony for the sale, transfer, purchase and gifting of their properties. Temples and gurdwaras operate under the provincial Auqaf and Religious Affairs Department.

According to Samuel Pyara, the Christian chairman of the Implementation Minority Rights Forum, seven NOCs have been issued in recent years for the sale of church-owned land.

“At least 30 properties have been sold with forged documents. Due to public opposition, the mainstream churches are not heard on this issue. Any law without exception is a bad law,” he told UCA News.

Pyara was speaking at the July 23 consultation on the Protection of Communal Properties of Minorities Act, 2020, organized at Caritas Pakistan Lahore. Lawyers, church activists and pastors attended.

Archbishop Sebastian Shaw of Lahore supported the issuance of NOCs for the sale, transfer, purchase and gifting of minority properties in Pakistan.

“Church properties are our identity. However, if a property is vacant for years, it must be sold to purchase another one. The bishop should describe the purpose and period for which it remained useless,” he told the consultation

“Only a commission representing all churches can be authorized to issue NOCs following an inquiry. The present law has ambiguities. My resignation is still pending with the National Minorities Commission. I didn’t understand the way they operated.

“An NOC will prevent the illegal sale of church properties and bring prosperity to our community. Salvation Army officials cited building a seminary as an exclusive reason to sell the hostel. We have no objection.”

Self-appointed bishops of former factions, now part of the Church of Pakistan, present old documents to claim the land

The Church of Pakistan faces the most legal disputes over its property. It was established in 1970 by Anglicans, Methodists, Presbyterians and Lutherans who pledged to be united.

According to Kashif Alexander, legal aid officer of the Protestant Church, most cases are related to old titles.

“Self-appointed bishops of former factions, now part of the Church of Pakistan, present old documents to claim the land. Many retired pastors refuse to leave their houses. Sadly, our community lacks unity on many issues,” he said.

On July 6, a Lutheran bishop of Mardan in Khyber Pakhtunkhwa province held a press conference in Islamabad to oppose the act that mandates the federal ministry to sell the properties of religious minorities.

The People’s Commission for Minorities Rights (PCMR), a voluntary human rights watchdog, also questioned the haste of the amendment to the ordinance.

“There is no assessment of church properties under litigation. The law should be reviewed as well. We need more debates and consultations among the community. Different church groups have different problems regarding the ownership, management and disposal of their properties,” Jacob said.

“Concerned experts should be hired to ensure transparency and accountability. The engagement of a sham National Minorities Commission increases the chances of corruption.”

On July 3, Vatican prosecutors indicted 10 individuals and entities, including Cardinal Angelo Becciu, former prefect of the Congregation for Saints' Causes, on charges ranging from embezzlement to money laundering and abuse of office in connection with a €350 million ($413 million) luxury property deal in London.