Church charities offer treatment, rehabilitation and the chance of an education to young addicts 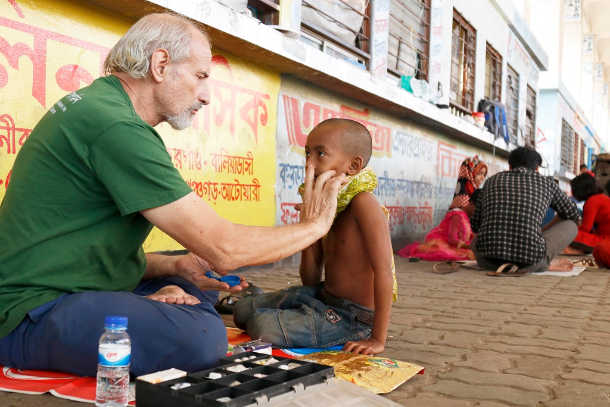 A curious and adventurous mind led Mohammad Noor (not his real name) on a path of destruction at an early age, but he lived to tell the tale.

Noor, a Muslim boy of 14 from Gazipur district near Bangladeshi capital Dhaka, was a drug addict until early 2018.

“I was born in a poor family and my parents separated. My mother enrolled me in a school but couldn’t afford the expenses, so I dropped out. Instead, I became friends with local boys and we used to play together at Tongi railway station,” Noor told UCA News.

Some of his friends were addicted to various drugs — yaba (methamphetamine), marijuana and dandy, the vapor of solutions used in repairing or joining items of leather and rubber. Out of curiosity, Noor started sniffing dandy and then moved on to yaba and marijuana.

One day, Noor boarded a Dhaka-bound train and reached Kamlapur, where the country’s largest railway station is located. He collected scraps and sold them for food and drugs every day before he encountered some anti-drug volunteers at the station.

The center started in the capital but later shifted to Manikganj district in central Bangladesh. It helps adult and child addicts get back to a normal life free from drug addiction.

“The volunteers took me to the center. There I went through treatment and counseling, and then I started attending school from grade three,” Noor said.

As the boy was declared fully cured by the end of 2019, he was sent back to his mother. At home he got admitted to grade five and started going to school regularly.

APON funds his schooling and the staff regularly contact his mother for updates on his progress.

“Now I have a good life. I dream that when I grow up I will set up a facility like APON where children like me will get services,” Noor said. Filling in gaps for child addicts

This young lad is one of dozens of street and floating children served by APON over the past decades.

“Most child addicts inhale easily available dandy glue and cannabis, some take yaba, which has recently become quite scarce due to strict law enforcement. We offer child addicts treatment and counseling and send them to schools when they are better,” Asaduzzaman Jewel, head of treatment at APON, told UCA News.

“They can stay here as long as they want. We send them to schools or return them home when they are willing. We keep in touch with them after their release.”

Impoverished and unschooled children as well as children from broken families, especially those living in slums in cities, town and suburban areas, are most vulnerable to drug addiction, said Jewel, a former addict.

Bangladesh Rehabilitation Assistance Center for Addicts (BARACA), a special project under Catholic charity Caritas Bangladesh, has been assisting street children including addicts since 2016.

BARACA, founded by Brother Drahozal in 1988, is one of the oldest charitable drug rehabilitation services in Bangladesh. It runs two drop-in centers for street children at Babu Bazar in the old part of Dhaka that offer shelter to 45 boys and 30 girls respectively.

“We offer shelter for the night for orphans and those having no place to reside. There are child addicts who go through counseling, treatment, nutrition and education,” BARACA manager John Montu Palma told UCA News.

So far this year, 24 boys and 12 girls, some of them addicts, have started attending school, he said.

The Street Children Service Organization is an agency of volunteers set up in 2007 by Italian Catholic missionary Brother Lucio Beninati from the Pontifical Institute for Foreign Missions (PIME).

The organization has offered education, treatment and entertainment to more than 12,000 street children in Bangladesh including dozens of addicts in the cities of Dhaka, Sylhet and Chittagong in recent years.

Due to lack of oversight from police, poor government monitoring and facilities, more children in cities and towns nationwide are becoming drug addicts, anti-narcotic campaigners say.

In Dhaka alone, there are about 250,000 street children and at least 30 percent are addicted to drugs, according to Jewel from APON.

Poor children are often used as safe carriers for drug trafficking and they get into a variety of drugs at the end, he said.

Rabiul Alam, director of the state-run Department of Narcotics Control (DNC), admitted there is no government facility or service for child addicts.

“We cannot keep child addicts in centers for street children because they might influence other children. We are planning to set up treatment and rehabilitation centers for child addicts in the future. For now, we are prioritizing halting drug abuse so that everyone including children can stay away from drug addiction,” Alam told UCA News.

Bangladesh has an estimated 7.5 million drug users, according to the Association for Prevention of Drug Abuse (MANAS), a leading non-profit anti-drug campaign group. Unemployed youth and unschooled children are among the most vulnerable groups, it noted.

In 2018, Bangladesh launched a deadly crackdown on the proliferation of drugs that saw hundreds of drug dealers and traffickers killed in police shootouts and thousands arrested.

Rights activists including church officials slammed the lethal crackdown and termed it a flawed war against illegal substances.